America’s most elite special operations units have increasingly found themselves in the spotlight. After the rescue of Captain Richard Phillips... 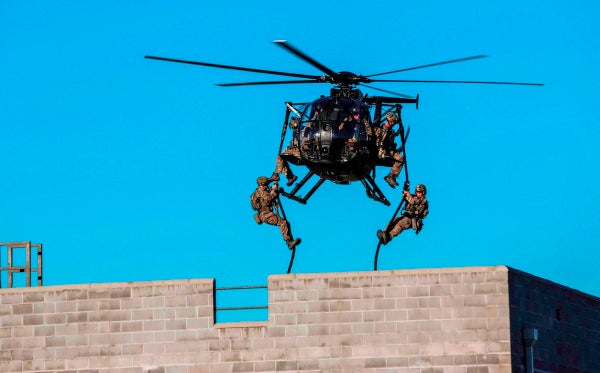 America’s most elite special operations units have increasingly found themselves in the spotlight. After the rescue of Captain Richard Phillips from Somali pirates and Operation Neptune Spear, the Naval Special Warfare Development Group, colloquially known as DEVGRU or SEAL Team 6, became the subject of immense public interest. But many outside the military have never heard about the shadowy command that SEAL Team Six, Delta Force, and other special missions units answer to: the Joint Special Operations Command.

JSOC oversees planning for joint unconventional operations, and conducts much of the “black” side of special operations. A new book, “Relentless Strike: The Secret History of Joint Special Operations Command,” from author and former Army Times journalist Sean Naylor aims to highlight JSOC’s history over the past 30 years. It also illustrates how JSOC moved to the forefront of combating insurgencies in Iraq and Afghanistan.

“Relentless Strike” isn’t the first time Naylor has covered the units under JSOC. His previous book, “Not a Good Day To Die:The Untold Story of Operation Anaconda”is a quintessential account of the March 2002 battle in Afghanistan’s Shahikot Valley, an operation that Naylor was present for as an embedded reporter. Operators from Delta Force, SEAL Team 6, and other JSOC units played a pivotal role in Anaconda, so Naylor is covering some familiar ground. Much like his previous book, Naylor explores the full breadth of the units and personnel involved. From the high-level politicking surrounding JSOC’s formation to the individual operators kicking doors in Iraq, “Relentless Strike” isn’t daunted by the scale of JSOC’s operations.

At the center of the book is the narrative of how JSOC evolved from a small organization with a highly specific counterterrorism mission to the the direct-action juggernaut it is today. The first part of “Relentless Strike” deals with JSOC’s genesis in the wake of the failed Operation Eagle Claw, the disastrous attempt to rescue American hostages held in revolutionary Iran in April 1980. Then, JSOC was mainly focused on a limited set of counterterrorism missions, like the rash of the airplane hijackings and hostage takings during the 1980s. While Delta and the rest of JSOC came close to actually getting the green light on various rescues during their two decades of operational status, their first operations successes came in support of more conventional operations in Grenada and Panama.

The book’s other narrative thrust starts here: the tendency of JSOC being handed difficult mission sets, regardless of whether JSOC was really suited for the problem; highlighting the missions given to SEAL Team 6 in Grenada in 1983, and a regular SEAL team’s airfield assault in Panama in 1989. The book also delves into some of the inauspicious details of JSOC’s birth; such as the fly-by-night antics of SEAL Team 6 founder Richard Marcinko, whose hard-drinking training regimen and unauthorized unit expenditures tainted the unit's reputation to the point that Chairman of the Joint Chiefs Gen. Colin Powell considered disbanding the unit all together in the early 1990s.

The rest of the book is dedicated to the growth of JSOC after the Sept. 11 attacks. The command had expanded to include the the 21st Special Tactics Squadron, the Intelligence Support Activity, and several other units. JSOC personnel spearheaded both the invasions of Iraq and Afghanistan, in which they conducted some truly remarkable operations, but the the command went into overdrive when Gen. Stanley McChrystal was tapped to lead it in 2003. Mcchrystal ushered in a new era of “industrial counterterrorism”, turning JSOC from an occasional player to a direction action killing machine that was focused on breaking the back of al-Zarqawi’s Al-Qaeda in Iraq. It’s surprising how much of the book only describes the past decade of operations; Naylor describes raid after raid that demonstrates how much JSOC’s operational tempo really increased. “Relentless Strike” also covers how these increased operation needs led to an evolution of the 75th Ranger Regiment, which stepped up to cover many of the same raid targets that Delta Force and SEAL Team 6 were tasked with in Iraq and Afghanistan.

A book with such a wide scope like “Relentless Strike” could easily get bogged down in the details, but Naylor displays an excellent command of the layers of jargon and acronyms when it comes to the the rather opaque world of special operations. Given that many of the sources for “Relentless Strike” remained anonymous, Naylor is also able to provide a wide spectrum of perspectives, from the strategic musing of Pentagon officials to pointed critiques from individual operators. Without these wide-ranging viewpoints, “Relentless Strike” could not nearly be as all-encompassing as it is.

There’s been consistent public appetite for information about special operations in particular units like Delta and Team 6, and “Relentless Strike” will absolutely satisfy that curiosity. But it goes beyond that, analyzing how, in Naylor’s terms, America’s “perfect hammer” for the War on Terror was built and acknowledges the command’s success while questioning whether JSOC is really the best solution for every difficult military problem. “Relentless Strike” is the most comprehensive dive into JSOC’s history to date, and an absolute necessity for any looking to fully understand the full extend of the past 15 years of war.