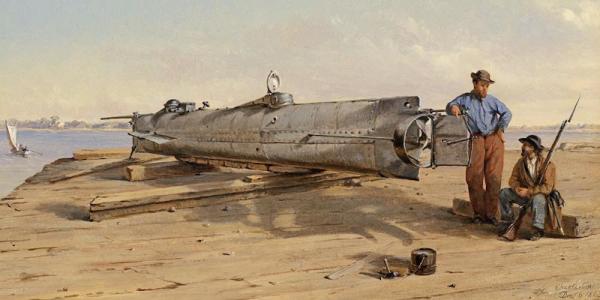 On February 17, 1864, the 12-foot-long Confederate submersible H. L. Hunley became the first combat sub in American history to sink a surface warship, torpedoing the U.S. Navy’s three-month-old sloop-of-war USS Housatonic as it participated in the Union blockade of Charleston, South Carolina. But instead of returning home, the Hunley sank immediately after, killing all eight of the Confederate crewmen on board. It was the short-lived sub’s third and final sinking.

Here’s where things get weird. When the sub was first discovered in 1995 and raised from the depths of Charleston’s harbor in 2000, conservators were presented with a strange scene: The crew had apparently died seated at their battle stations, the bilge pumps and ballast weights untouched. The configuration of Hunley’s hatches suggested there had been no attempts to escape the doomed vessel. There were no signs of physical trauma based on the crew’s skeletal remains. To the untrained eye, it appeared that the Hunley’s crew celebrated their historic attack on the Housatonic by just up and dying.

The cause of the Hunley’s demise has remained largely a mystery for more than 150 years — until now.

Inboard profile and plan drawings for the H. L. Hunley, based on sketches by W.A. Alexander, who directed her construction.Photo via U.S. Naval Historical Center/Wikimedia Commons

In a fascinating new analysis, partially funded by U.S. Army’s Multidisciplinary University Research Initiative program and published in the peer-reviewed journal PLOS One, engineers and scientists led by Duke University biomechanist Rachel Lance concluded after a three-year study that the Hunley, well… sank itself.

After deploying its primary weapon, a 135-lb copper spar torpedo filled with explosive black powder — affixed to a long wooden pole and activated by the pull of a cord — the crew detonated the munition less than 16 feet from the Hunley’s bow. The force of the detonation and resulting shockwave killed the Confederate sub crew instantly.

The H. L. Hunley as it would have appeared in attack position on the evening of February 17, 1864.Photo via Michael Crisafulli/The Vernian Era/PLOS One

“The blast produced likely caused flexion of the ship hull to transmit the blast wave; the secondary wave transmitted inside the crew compartment was of sufficient magnitude that the calculated chances of survival were less than 16% for each crew member,” Lance and her colleagues explain. “The submarine drifted to its resting place after the crew died of air blast trauma within the hull.”

Popular Science has a more macabre description: The sailors were “struck so hard by the force of their own torpedo's blast that the soft tissues of their lungs and brains would have taken immediate, fatal damage.” Gross.

But apart from solving a mystery, the research also presents a cautionary tale for engineers focused on underwater warfare. “It was the combination of all the simultaneous design changes: conversion from wood to wrought iron, sinking the vessel deeper in the water, lowering the torpedo, and attaching the charge much closer at the end of a spar that ultimately led to the demise of the crew,” the authors write. “The H.L. Hunley presents the first documented case of primary blast-induced fatality to personnel within a structure.”

It would take another four decades for submersibles to really make their mark on naval warfare, sinking surface vessels without the Pyrrhic aftermath of the Hunley’s assault. But sub warfare and the potentially deadly consequences of underwater explosions all begin with the story of those eight Confederate soldiers who accidentally doomed themselves with a spar torpedo.