Civil War-Era Submarine Revealed To Public After Years Of Restoration

Even as the public gets its first sneak peek at the interior of the Civil War-era Hunley, the world’s first... 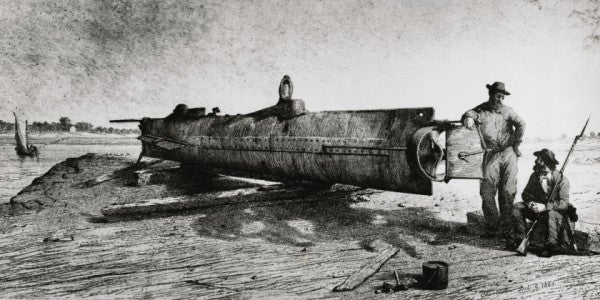 Even as the public gets its first sneak peek at the interior of the Civil War-era Hunley, the world’s first successful combat submarine continues to hold onto its chief mysteries.

Nearly 17 years after researchers began working to unravel why the Confederate sub went down off the Charleston coast, questions linger about why it sank and precisely how the eight-man crew perished.

“We have 90 percent of (the evidence),” project archaeologist Michael Scafuri said June 7 during a media tour to advertise the new views inside the 40-foot by 4 1/2 -foot submersible. “But we still can’t say conclusively.”

The Hunley sunk the USS Housatonic on Feb. 17, 1864, and then went down. The boat was found in 1995 and raised in 2000. Its exterior was put on permanent public display the next year. Now, visitors can see inside as the Hunley sits in a 75,000-gallon tank of water preserved with a 1 percent solution of sodium hydroxide.

After more than a year of painstaking work by researchers inside the cramped hull, visitors can see the experimental war craft’s innards, said members of the team, who work at the site’s Clemson University Restoration Institute, on the former Charleston Navy Base.

Two people outfitted in head-to-toe safety uniforms have been contorting themselves inside the sub. They use stainless steel orthopedic tools and a pneumatic chisel to gently remove the sea’s encrustation, which slowly has enveloped the sub in the 136 years since it went down, said Johanna Rivera-Diaz, project conservator.

The crew’s primary remains have been exhumed and buried. Many small bones – fingers, wrists and teeth – have been discovered since then, chronicled and traced through historic records to individual crewmen, Rivera-Diaz said.

The largest number of bones have been linked to first crewman Arnold Becker, who sat closest to the Hunley’s captain, George Dixon, near the sub’s bow, as Becker helped turn the propeller crank, she said.

On most of the five-hour days that Rivera-Diaz and another researcher work inside the submarine from its bow and stern, their focus is on the delicate precision needed to remove what the sea deposited over the decades.

The tank must be drained and refilled each of the three days a week the researchers are inside. It takes four hours each time the water is removed and returned, she said. Even as they work, the hull must be covered in plastic to help retain moisture that is key to preserving the boat.

The center of the submarine’s interior has yet to have the build-up removed.

The protective gear insulates the researchers from the caustic sodium hydroxide that helps draw salt from what they call “concretion” that’s attached to every inch of the Hunley.

But on certain days and with the discovery of memorable artifacts, Rivera-Diaz is struck by the historic value of the work. “When I find something, I step back and say, ‘Wow,’” she said.

Still, the pace of the job can be frustrating.

“We were hoping to be pretty much done” some 18 months after work on removing encrustation began, she said. The new timetable is now the end of this year.

Related stories from The State

Scafuri, the archaeologist, focuses on all the progress they have made since the sub was delivered into their hands. “It looks like a submarine as opposed to a corroded artifact,” he said from a visitation platform above the vessel.

Most of the hypotheses that researchers had about the Hunley have been borne out by the artifacts, he said, citing the discovery of pieces of textiles that support notions that some crew members had wrapped the propeller crank to avoid blisters.

A simulation indicated that the force of an explosive blast when the Housatonic was struck was not sufficient to have sunk the Hunley, Scafuri said. But the explosion could have knocked the crew unconscious.

“There are a lot of unanswered questions about what really happened that night,” he said.

One theory that has been ruled out is that the Hunley was equipped with a detachable torpedo. A long wire and a spool found inside would point to the likelihood that the sub had an internal trigger. The trigger would not have launched the payload but simply been used to detonate the roughly 135 pounds of black powder in the explosive head that was attached to a slim, metal rod, he said.

Another hypothesis the evidence has eliminated is that the crew drowned. A three-dimensional reconstruction showed each man died seated at his post along the crank shaft.

“That means there was no panic,” Scafuri said. “It complicates our theories.” Yet he remains fascinated by the project.

A new working theory is that the crew asphyxiated – not drowned from water in their lungs – after they consumed all the oxygen in the sub’s air bubble.

Scafuri would not say when the research will be done and or when the team would proclaim solutions to the deepest mysteries of the Hunley.

“I could never say, ‘This is what happened’ … until we’re done,” the archaeologist said. He said he doesn’t know when that might be.