On the morning of Aug. 26, 1980, an employee of Harvey’s Wagon Wheel Casino in Lake Tahoe, Nevada, discovered two... 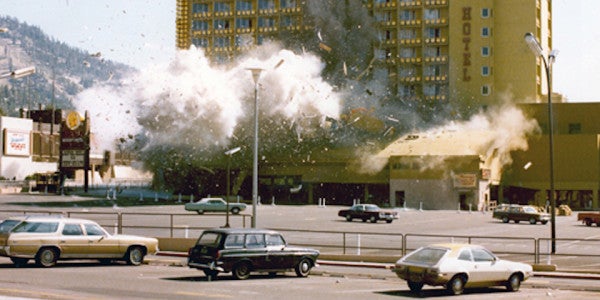 On the morning of Aug. 26, 1980, an employee of Harvey’s Wagon Wheel Casino in Lake Tahoe, Nevada, discovered two stacked metallic grey boxes on the casino’s second floor. Unbeknownst to the employee, the boxes had just been delivered to the building by two men posing as delivery guys for IBM. One of them was John Birges, a Hungarian immigrant with a colorful past that included a stint as a Luftwaffe fighter pilot during World War II and eight years in a Siberian gulag.

and a variety of triggering mechanisms that made it virtually undefeatable.Photo via FBI

In 1980, Birges was living in Fresno, California. He had made millions of dollars in America, but by that point he had lost nearly all of it to gambling — at Harvey’s. The boxes he left in the casino were accompanied by a three-page letter that began: “Do not move or tilt this bomb, because the mechanism controlling the detonators in it will set it off at a movement of less than .01 of the open end Ricter scale.” It was a ransom note.

The demand: $3 million or the bomb explodes. The FBI decided to go with a third option: Try to disarm the bomb. Later, agents would claim the bomb was “undefeatable.” To this day, it’s regarded as the most complex improvised explosive device the FBI has ever encountered on U.S. soil. The boxes were packed with nearly 1,000 pounds of dynamite, every ounce of which ripped through the hotel when agents tried to disarm it with C4. Fortunately, because the casino had been emptied, not a single person was harmed.

Birges was eventually arrested and died in prison in 1996.