This Iraqi Interpreter, Called A Traitor At Home, Finds Peace In Texas

Othman Aljanabi is a husband, father and English teacher, but his job as an interpreter for the U.S. Army makes... 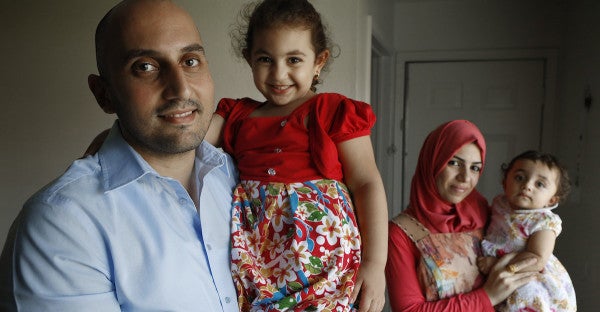 Othman Aljanabi is a husband, father and English teacher, but his job as an interpreter for the U.S. Army makes him a traitor to some in his native Iraq.

Aljanabi, using the code name “Justin,” was a contract worker who helped U.S. military forces in Iraq from 2008 through 2011. His knowledge of English and Arabic, body language and cultural nuances helped the U.S. military during operations in red zones, or unsafe areas.

He said he received numerous death threats and feared terrorists would kill him. Aljanabi said he could not come and go freely from his house in Baghdad and that no one ventured outside at night because they worried about terrorists, militias or “bad guys,” he said.

“Imagine every day being scared of being kidnapped or being killed,” said Aljanabi, whose last residence in Baghdad was about 15 minutes from the Karada shopping district, where a suicide bomber recently killed more than 200 people.

Today, Aljanabi and his family are among 329 Iraqis who used a special immigrant visa to come to Texas between Oct. 1 and May 31, according to U.S. Department of State data. Forty-four of those Iraqis resettled in Fort Worth.

Congress has allowed provisions for certain Iraqis and Afghan nationals who worked for the U.S. government as interpreters or translators during the wars in Iraq and Afghanistan. Under the special visa program, these workers get benefits similar to refugees, including permanent legal status. After living in the U.S. for five years, they can apply for U.S. citizenship.

Hadi Jawad, a member of the Dallas Peace and Justice Center’s Middle East Peace Committee, said the United States has a history of resettling people who help U.S. troops during conflicts. Before Iraqi interpreters and translators arrived as newcomers to this country, refugees from Vietnam, Cambodia and Laos were welcomed, Jawad said.

“These people put their lives on the line for us,” said Jawad, who is of Iraqi descent. “We owe it to them. We have a moral obligation.”

Aljanabi tried to build a life in Iraq for his wife, 26-year-old Zahraa, and two daughters, Melak, 3, and 9-month-old Meera. But he worried that if his work as an interpreter was exposed, they would be targeted.

“Honestly, they hate us more than the United States Army,” said Aljanabi, 27. “Multiple times they called me a traitor.”

So Aljanabi left Iraq on Nov. 23, 2015. A new life in Fort Worth started the next day. His family joined him in February.

“I liked everything before seeing it, and when I saw it, I liked it more,” Aljanabi said of Fort Worth.

Aljanabi met his future wife when both were studying English at the University of Baghdad.

Aljanabi wanted to get married and be able to provide for a family, so he signed up to work with U.S. forces.

After being cleared through intense security checks, he began his job in October 2008 and said he took home about $1,000 month as an interpreter, compared to the $500 a month he would later make as an English teacher.

Aljanabi’s assignment was to work with different military units, including the 56th Stryker Brigade National Guard from Pennsylvania. He worked mostly in the area that included Abu Ghraib, a town west of Baghdad. From 2003 through 2006, Abu Ghraib is where the U.S. had a prison for Iraqi detainees — it made international news after U.S. soldiers were accused and later convicted of abusing prisoners.

He said interpreters and translators were embedded with units and were used during meetings with Iraqi city leaders, security patrols, combat missions and sometimes emergency medical situations after bombings. Often they translated documents or videos that troops would find in underground terrorist caches.

“They would ask, ‘What is this? What is that?’” Aljanabi said.

Sgt. Sergio Angel Carmona served in the 56th Combat Stryker Brigade and knew Aljanabi by his work alias, Justin. He said interpreters were a critical part of the teams sent out on missions because they not only served as communicators, but also understood body language and cultural nuances that Americans might not pick up.

Carmona said his unit spent eight to 12 hour days riding in armored vehicles with Aljanabi. The soldiers and Aljanabi formed a friendship.

“You can imagine being in close proximity with somebody, you get to know them pretty well,” Carmona said during a telephone interview. “You get to build a relationship with them. … Conversations go into the surreal to the very serious to the ridiculous.”

Aljanabi, too, said he bonded with the U.S. soldiers. He was touched when some U.S. soldiers told others to keep quiet so Aljanabi could rest; he had to get up at 4 a.m. to get to school on time.

He said working with the soldiers changed his perceptions of Americans.

“All we had was bad ideas about Americans,” said Aljanabi, who was about 14 when the U.S. invaded Iraq.

Because his safety required his identity as an interpreter to be kept secret, he lived in an atmosphere of suspicion and fear.

Aljanabi said it hurt him that fellow Iraqis considered him a traitor, including members of the Iraqi army who worked with U.S. forces.

But while their verbal assaults hurt, he knew terrorists would not bother with words.

When he started working for the United States, al-Qaida had the terrorist stronghold in Iraq.

Carmona said once interpreters or translators left a base after a shift, they were on their own.

“They are basically subject to anybody who may want to do them harm,” Carmona said.

Aljanabi said people would ask him: “Where do you work?” “Where did you get an American accent?”

“I had to lie every time,” Aljanabi said, explaining that he would tell people he worked at a cellphone, Internet or computer company.

While Aljanabi was on duty, Zahraa Aljanabi said she prayed for his safe return.

As Justin, Aljanabi was assigned to combat missions in volatile areas — called red zones. There were bombings and threats during work hours — but also during his time off.

“I’m scared at work and I’m scared off work,” he said, describing how he worried about being hunted by terrorists.

One day in 2010, an envelope was left in the doorway of his parents’ house. Inside the envelope was a bullet, and a note that read: “Traitors will be burned. We know who you are.”

The threatening message spurred Aljanabi to apply for permission to come to the United States. At that time, he sought refugee status, which is different from the special immigrant visa program.

Aljanabi said he changed his address and car, but he didn’t quit his job. Then in early 2011 he was followed by a mysterious driver as he was leaving work. It scared him into quitting.

As he waited on the visa paperwork to be processed, Aljanabi continued to study and got a job teaching English in Diyala, east of Baghdad.

Diyala was wrapped in ethnic struggles between Sunni and Shia groups, he said. Despite being a friendly person to people from all backgrounds, he worried.

Like in his experience with Americans, Aljanabi made friends, but he learned that teachers also faced peril. For example, militia groups and tribe leaders of ethnic groups had been known to attack teachers who didn’t pass their students.

His work as an interpreter lurked behind him as an unwanted shadow, as others questioned the roots of Aljanabi’s “Americanized” English.

“It’s just watching a lot of MTV, watching movies, listening to music and that’s it,” Aljanabi would tell people. “It’s not what you think.”

Over time, he said, the threat of the Islamic State grew and intensified.

By June 2014, one-third of Iraq was in the Islamic State’s hands, according to numerous media reports.

In Pennsylvania, Carmona worried about his friend.

Aljanabi used Facebook to keep in contact with Carmona, who tried to help by calling lawmakers and sharing Aljanabi’s predicament.

“I will do my best to get you out,” Carmona told him.

Toomey’s office confirmed that inquiries were made “at the request of a Pennsylvania constituent,” but no other details were released due to federal privacy rules.

“He kept going higher and higher until he reached a senator,” Aljanabi said, explaining that Carmona would tell people: “‘Hey, this guy saved our lives. We need to save his.’”

“I will be thankful for him for the rest of my life,” Aljanabi said.

Aljanabi kept on the move in Baghdad and kept changing jobs, but he reached a point where he felt he couldn’t go anywhere.

Life in Iraq was just too dangerous.

Finally, in September, Aljanabi received word he would be able to leave Iraq with a special immigrant visa.

The news was bittersweet, for he was told he would have to leave his wife and daughters behind — at least for a few months.

The days that followed his arrival in Texas were characterized by prayer and hope that his wife and daughters would soon be able to join him. He wasn’t alone, because his parents had been granted permission to live in this country before him.

It didn’t take too long for Aljanabi to experience one of the happiest days of his life. On Feb. 18, Aljanabi’s family arrived at Dallas/Fort Worth Airport.

And then Aljanabi saw his daughter.

“I have no words to explain. I was just crying,” he said.