Pledging allegiance from Iraqi interpreter to US soldier to American citizen

"I didn't have a normal and safe childhood ... I did this so my kids could live, and be safe" 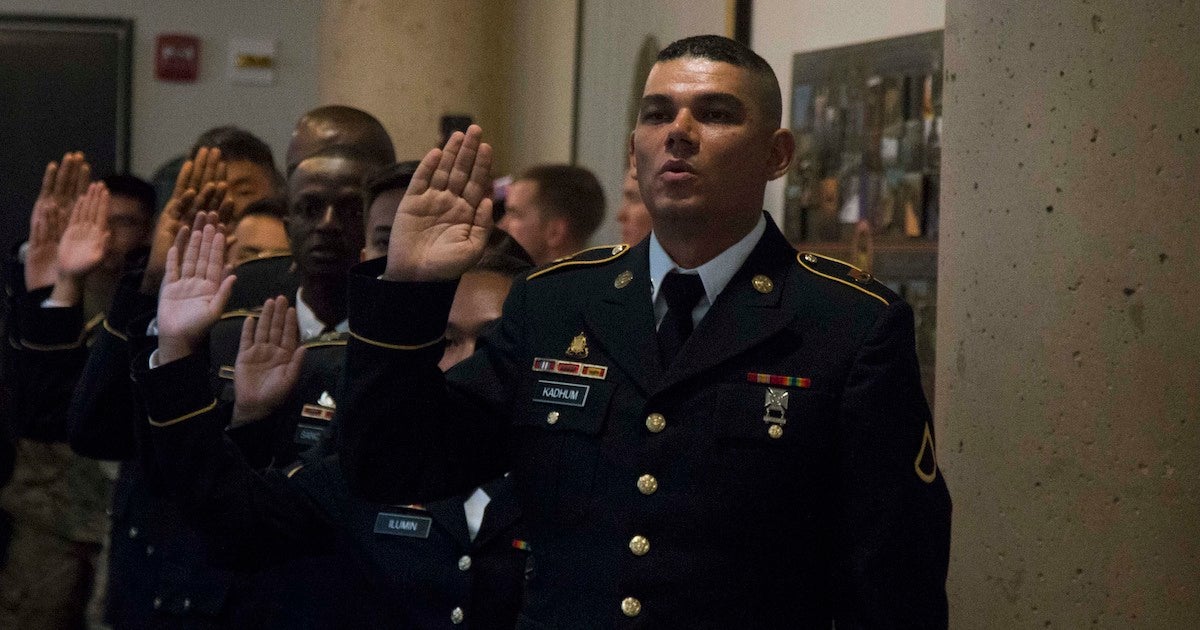 FORT HOOD, TX — “I didn’t have a normal and safe childhood,” Pvt. 1st Class Yasir Kadhum said woefully. “I did this so my kids could live, and be safe.”

Kadhum was born and raised in Baghdad, Iraq. Growing up, he never considered the life he lived was anything out of the ordinary, until he was an adult and attending his first year of college in 2003, when U.S. forces entered Iraq.

Related: A history of foreign-born service

“It was a complicated feeling then,” Kadhum remembered. “We were happy, but it was also scary, because during the Saddam regime we had nothing. In 2003, we had hope.”

Iraq had become a warzone right in front of his eyes.

“When the coalition forces had come to Iraq to free us from Saddam, I was in college and decided I needed to help.”

Kadhum was hired by a U.S. contractor and used the time to establish himself and work on his English. When the request for translators was made from the U.S. Army, he knew he could do more.

Kadhum learned immediately that his job as an interpreter could have either a negative or positive effect based on his translations.

“If I missed one word when translating, then something could have happened,” he said.

Kadhum started his job as an interpreter working with a Military Transition Team. His team worked directly with the Iraqi Army, training them and providing guidance on how to use equipment, clear rooms and other necessary tactical skills.

Being in the position he was in, Kadhum was sometimes the only connecting piece between the Iraqi forces and U.S. forces. Eventually, he would become a target of the enemy and had to start concealing his identity whenever traveling outside of his job.

“Our people think we aren’t good people because we help the U.S. Army,” he said. “They started threatening us and following us many times. They would threaten us either directly or indirectly.

I had to move my family with me from place to place. “

As a result of the threats, Kadhum felt pressured to leave the MiTT and started working at a prison, still as an interpreter.

“This was another challenge for me,” he said. “To help the prisoners and most of them were terrorists. But it was their human right.”

Kadhum said he gained experience in the proper and fair treatment of prisoners, despite the crime they committed. Ensuring the imprisoned received the right food and water in accordance with their rights was, at times, difficult for Kadhum, but despite his struggle, he continued to help facilitate the standard.

In 2007, Iraq had become a more dangerous place. Enemy forces were relentless with their attacks on the government, U.S. forces and the people of Iraq.

Kadhum’s main purpose for working with U.S. forces was to benefit the country and people of Iraq. Unfortunately, others did not feel that was the purpose of the interpreters.

All the time I must hide everything, even the ID I had, I had to hide in my boot. We had to travel together [the interpreters] to go home to make sure we were safe.”

Kadhum continued his support to the American forces until he determined it was no longer safe to stay in Iraq.

“I was scared for my son when he went to school,” Kadhum explained. “My wife would go with him and wait because maybe someone would kidnap him; every time he went to school my wife stayed with him.”

With the help of the program established for interpreters who assist the U.S., he was able to get a Special Immigration Visa, to come to America with his wife and two children ages 7 and 1, in August 2016.

“I feel like at first when I came here I felt safe,” he said. “My oldest is almost ten and my daughter is now three.

A few months later, Kadhum was in a recruiter’s office looking for a way to give back to the very institution that he had already given so much.

“Right now for me the Army is not a job, it’s not a career,” he started. “I’m serving. This is what I feel because at least I can pay back what the U.S. Army did for me.

I came here and the first thing I thought was I needed to serve; because this Army has worked to help people to do better in their life. I believed it at the time even when I was an interpreter.”

In early July, Kadhum recited the Naturalization Oath of Allegiance to the United States, and became an official U.S. citizen with more than 15 other Soldiers during a ceremony on Fort Hood.

“I’m really happy but at the same time it is a big responsibility,” he said while smiling. “While serving in the Army it is a responsibility, but even if I get out of [the] Army as a civilian I still have more responsibility.

When you choose to get that citizenship it is different from the people who are born with the citizenship. When it’s harder to get it, it is a big commitment. I have more appreciation for it.”

Kadhum is looking ahead to the future for himself and his family.

“The best thing is because of the naturalization, I can do anything now,” he said. “My hopes are for my kids that they get to live a normal life and every thing will be perfect for them.”