The KGB Stalked A Snap-Happy French Tourist For Eight Years. But Was He A Spy? 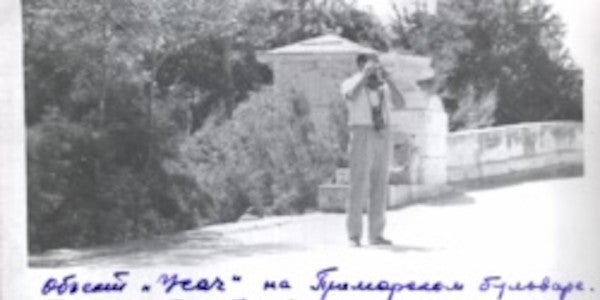 KYIV — Fifty-five years ago, on September 11, 1963, a plane took off from Kyiv for Vienna. On board was Julien Galeotti, a French citizen accused of espionage and expelled from the Soviet Union.

Recently released documents from the KGB archive in Kyiv have revealed details of Galeotti's story and brought to light the remarkable photographs he took during his travels in the Soviet Union. For eight years, KGB agents followed the man they called “The Moustache.”

But was he a spy?

Galeotti made his first trip to the Soviet Union as a tourist in 1955, with stops in Moscow and Leningrad, which is now St. Petersburg. From the beginning, he attracted the attention of the KGB.

According to reports filed on him, KGB agents believed the snap-happy Galeotti was trying to make secret “compromising photos” in the Soviet Union aimed at “discrediting and mocking intentionally created ugly images and insignificant aspects” of Soviet life.

In one photograph taken in front of the newly constructed main building of Moscow State University, the KGB alleged Galeotti had set up “clearly posed French citizens depicting unemployed people.”

The next year, Galeotti was back, this time taking a cruise from the southern French port of Nice on to the Black Sea, with stops in Odesa, Sevastopol, and Yalta in Ukraine, as well as Sochi in Russia and Batumi in Georgia. He made similar cruises in 1957, 1959, 1961, and 1963.

Over the years, he took photographs of Soviet citizens standing in lines for basic goods. He photographed a beggar in an Odesa market and military vessels in port.

“At 14:00, he went into the courtyard of Lenin Street, No. 59, and took a photograph of a trash container,” a KGB report from August 12, 1957, said about Galeotti’s time in Odesa. “Then, walking along Provoznaya Street, he photographed poorly dressed citizens.”

Soviet agents followed him the entire time, watching him both on board the cruise ship and ashore. According to their reports, Galeotti tried to become friendly with the crews of the ships, showed an interest in Soviet ports and whether military ships were present, and organized anti-Soviet shows and skits aboard the cruise ships.

Soviet citizens relaxing on a Moscow bench or French tourists posing as the unemployed?

On his final trip to the Soviet Union in 1963, Galeotti was back in Sevastopol, the Crimean Peninsula port city that was home to the Black Sea Fleet. The KGB arranged to have civilian militia (druzhinniki) headed by KGB agents stationed at sensitive viewing points overlooking Soviet military vessels in anticipation that Galeotti would want to take photos there.

An operational group was set up with the intention of detaining him. The pretext for arresting him was based on the “statements of Soviet citizens,” including a letter from the captain of the cruise ship.

When agents arrested Galeotti in Sevastopol on August 22, 1963, they didn't find any film on him. He'd managed to pass his rolls to another French citizen who, according to the intelligence reports, hid them in the seat of his Soviet tourist agency bus. That French citizen spent the rest of the cruise aboard ship without disembarking in the Soviet Union again, and the KGB eventually recovered the rolls of film from the bus.

Galeotti spent nearly three weeks in custody, first in the Crimean capital, Simferopol, and then in Kyiv, where he was taken for further questioning.

A KGB surveillance photo of Galeotti in Odesa in 1963Jared Keller

At first, Galeotti denied being a French agent. He said all of his photographs were taken out of personal interest. But eventually he confessed that he had worked with the French secret services, but only during his last trip to the Soviet Union when he'd been asked to photograph military objects in Sevastopol. Later in the interrogation, he admitted that he'd carried out such assignments from his first trip to the Soviet Union.

He said that when he returned to France after each trip, he sent the film to the photo studio of his father, a former French intelligence agent.

Galeotti “repented of his actions, saying that he had made a terrible mistake that he would never repeat,” the KGB reported following his interrogation.

According to the file, Moscow decided merely to expel Galeotti because, at the time, two KGB operatives had gone missing in France. It was decided “to exploit the situation as part of a more comprehensive plan.” KGB agents continued to follow and photograph The Moustache until the very moment that his plane left the ground.

Upon returning to France, Galeotti told journalists: “I can't go back to the Soviet Union anymore. But then again, I don't want to.”

espionage
France
History
How The Other Half Fights
news