"They just weren't like normal Mainers in November. You just never saw anybody walking without boots when it was snowy like that." 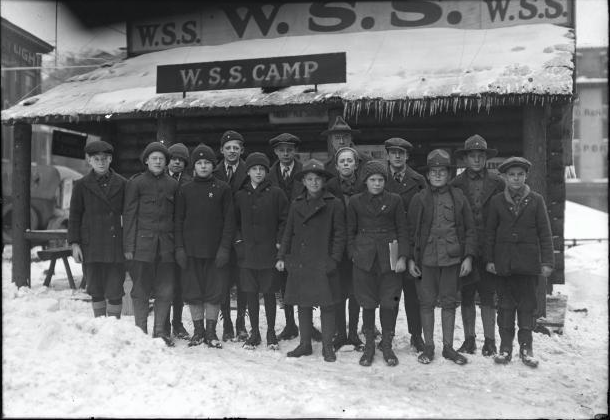 Nov. 29—It was a snowy, blustery November night in 1944 when two Hancock residents separately spotted something highly unusual, as they each drove home after spending the evening with friends.

Seventeen-year-old Harvard Hodgkins, on his way home from a dance, saw them first. Then Hodgkins’ neighbor, 29-year-old Mary Forni, who was driving back from playing cards with friends, spotted them — two men, underdressed and carrying large suitcases, trudging through the snow along the side of the road. It was just before midnight on a Wednesday, on the then sparsely populated Hancock Point peninsula. What on earth were the two men doing?

As it turns out, what both Forni and Hodgkins had spotted were not two people simply lost in the snow. They’d seen two Nazi spies — William C. Colepaugh, a 26-year-old native of Niantic, Conn., and German native Erich Gimpel, 35, who around 11 p.m. on Wednesday, Nov. 29, 1944 made landfall in the U.S. after a two-month journey across the Atlantic Ocean in a German U-Boat.

In the spies’ suitcases were radio equipment, security ink and other spy paraphernalia, $60,000 in cash and 99 small diamonds. Their mission was to eavesdrop on American servicemen, in an attempt to learn more about the Manhattan Project to build an atomic bomb, as well as other technological advancements happening in the country.

Coldpaugh and Gimpel were briefly accompanied ashore by two uniformed Nazi officers, who now-deceased Blue Hill resident Richard Gay, a former U.S. intelligence officer and spy historian, said were “possibly the first enemy dressed in a military uniform to set foot on continental U.S. soil since the Mexican War in the 1840s,” and were likely the last since.

After spotting the spies, Forni continued home, noting the oddness of the sight — especially that the men were wearing street clothes and no warm coats — but not stopping to investigate.

“They just weren’t like normal Mainers in November,” Forni told the BDN in 2001. “You just never saw anybody walking without boots when it was snowy like that. It’s a wonder I didn’t stop and offer them a ride.”

Hodgkins, a local Boy Scout, doubled back and followed the men’s tracks in the snow to the shore, where he says he found a small rubber raft, bobbing around in the turbulent water.

The next day, both Forni and Hodgkins told the story to their respective families. Hodgkins’ father later contacted the FBI, and a few days later, agents arrived in Hancock to interview both eyewitnesses.

According to a 2005 story published in America in World War II magazine, Gimpel was an accomplished German spy who was working in Peru when the war broke out. He was deported from Peru to the U.S., where he was held in a Texas internment camp for seven weeks before being sent back to Germany. Colepaugh, the American, was a German sympathizer who snuck into Germany via Portugal, where he was trained by the S.S. as a spy. The operation the two were paired up on was dubbed Operation Elster — “magpie,” in German.

After their walk through the snow in Hancock, the pair took a cab to Bangor and then a train to Portland, and then went to New York, where they stayed for several weeks before Colepaugh abandoned Gimpel and turned himself in. Gimpel was also eventually found and arrested. In February 1945, the pair were found guilty by a military court and sentenced to death by hanging, but after President Franklin D. Roosevelt died, all executions were postponed, and by the time the postponement was over, the war in Europe was won, and Harry S. Truman was president. He commuted their sentences to life in prison.

Forni’s life continued on in much the same way after her surprise act of counter-espionage, though townsfolk in Hancock did present her with a $100 war bond. She died in 2006, at the age of 91.

Hodgkins, who died in 1984, briefly became a bit of a celebrity. According to an obituary published in the New York Times, he and his family were flown to New York City by the New York Journal-American, where he was met at the airport by 73 fellow Boy Scouts, and was taken to Broadway shows, introduced to Babe Ruth and heavyweight boxing champion Joe Louis, and given the key to the city. He was later given a full scholarship to Maine Maritime Academy.

Is it possible that the filmmakers behind “The Hunt for Red October” were inspired by the fact that a submarine — in their case, a Russian one, in the Penobscot — made its way into Maine waters? Probably not, but it’s certainly fun to imagine.

“The truth is that Mary Forni and Harvard Hodgkins sounded the alarm that the Germans had landed, and it was their alert that launched the FBI dragnet,” Gay, the spy historian, told the BDN in 2006. “They are New England patriots, no less than Paul Revere, and deserve full credit for their place in Maine and U.S. history.”

Related: How the Royal Navy tricked the Nazis into sinking their own battleship during WWII