Some people celebrate the Fourth of July with beer, barbecue, and fireworks. Others prefer more unconventional forms of celebration — … Continued 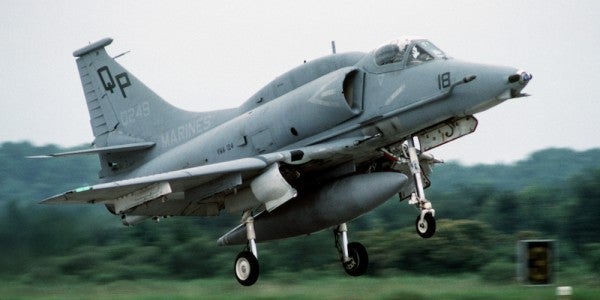 Some people celebrate the Fourth of July with beer, barbecue, and fireworks. Others prefer more unconventional forms of celebration — like stealing a $14 million subsonic attack aircraft and taking it out for a spin in the skies above California.

That's how Marine Lance Cpl. Howard A. Foot Jr. spent America's birthday on July 4th, 1986, when the then-21-year-old mechanic clambered into the cockpit of an A-4M Skyhawk at El Toro Marine Corps Air Station and took off on the joyride of his life.

Despite never having flown a fighter jet before, Foote managed to pull off a pretty badass flight, as the fantastic aviation reporter Tyler Rogoway described it for Foxtrot Alpha:

This wasn't a youthful prank, like, say, riding dirty through the streets of Virginia in an M577 Armored Personnel Carrier. Rather, Foote's airborne antics were a last-ditch effort to, as Los Angeles Times put it, ” his lifelong dream of being at the throttle of a fighter jet, albeit a stolen one.”

The previous February, Foote had apparently suffered an aerial embolism during an attempt to set a glider altitude record — and just a few days after he was informed by military doctors that the incident would preclude him from ever sitting behind the throttle of a Marine Corps fighter jet, he absconded with the Skyhawk.

Foote was discharged from the Marine Corps, but all charges against him were dropped. This was likely thanks to his close relationship with retired El Toro chief Gen. William A. Bloomer, a mentor of Foote's who had encouraged him to participate in the gliding challenge that dashed his dreams.

And while we're not exactly sure what Foote is up to now, the Los Angeles Times catch-up with him some 15 months after the incident revealed a man eager to get back in the air.

“I'm waiting to hear if the Israeli Air Force will take me,” Foote, then a pilot for a charter airline, told the Los Angeles Times in 1988. “And if that doesn't work out, I'm going to see if I can fly for Honduras. I've heard they recently got some Skyhawks.”

Here's to you, Foote, for celebrating America's birthday the way God intended: by fulfilling your dreams, consequences be damned.