He lost his arm, leg and eye saving his fellow Marines during WWII. Now his family says he deserves the Medal of Honor

For their actions during the bloody struggle for Iwo Jima during World War II, 27 sailors and Marines received the Medal of Honor. Harry Jackson Sr.'s family is trying to make it 28 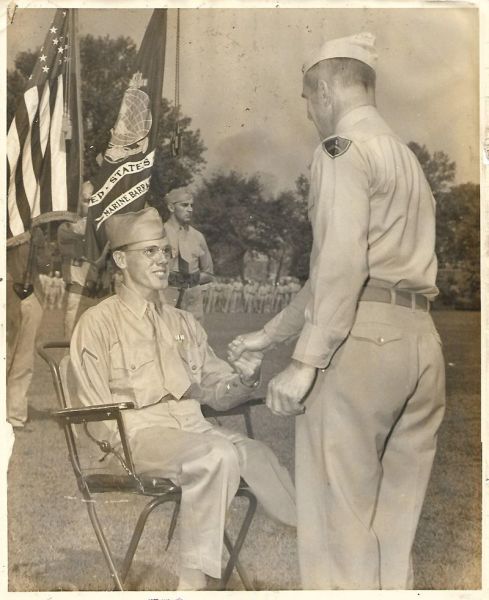 Seventy-five years ago, 70,000 Marines battled for control of the island of Iwo Jima. During the 36 days of battle, 27,000 American service members were killed or injured.

For their actions in that bloody melee, 27 sailors and Marines were awarded America’s highest military award: the Medal of Honor.

Now, one Virginia Beach family is trying to make it 28.

Harry Jackson Sr. was born and raised in Norfolk. At 19 years old, like many young men during World War II, he enlisted in the Marines.

He eventually found himself shoulder to shoulder with thousands of other Marines on the rocky island, fighting the Japanese in close combat. He would eventually earn a Silver Star — the nations third highest military honor.

On March 19, 1945 — seven days before the battle ended — Jackson saved three of his fellow Marines, according to his Silver Star citation and dispatches from Marine Corps correspondent Frederick Dashiell.

Jackson — a private first class — was assigned to a machine gun squad that was attached to a rifle platoon on outpost duty. During the night, enemy soldiers were able to infiltrate the perimeter and throw a grenade into the foxhole shared by Jackson and his comrades.

When Jackson saw the grenade, he didn’t hesitate. He took off his helmet, placed it on the grenade and covered it with his body. The ensuing explosion, according to dispatches from Dashiell, shot his helmet into another foxhole 15 feet away.

Harvey Ellis, one of the Marines in Jackson’s foxhole, was blown halfway out of the hole and took shrapnel to his back and hip. Another, Troy Gardner, was unscathed, Dashiell said.

Jackson suffered significant injuries from the explosion, including the amputation of his left leg and right arm and the loss of his left eye. But he survived.

“Harry did just what anyone who knew him would have expected him to do,” Ellis said in a dispatch by Dashiell. “He was always on the ball, always moving around, always helping the fellows.”

He was struck by his “selfless act to save three of his buddies,” and that he didn’t receive a greater award.

“The natural instinct is to jump away from it, and he could have done that nobody would have faulted him,” Rigg said.

Rigg kept researching and found 27 service members were given the Medal of Honor on Iwo Jima — seven of them for actions similar to what Jackson did. Of the seven Medal of Honor recipients who jumped on grenades, 17-year-old Jack Lucas was the only one to survive.

“I’m like, ‘Wait a second,’” Rigg said. “Harry did exactly what Jack Lucas did and all these other guys. And Harry, for whatever reason, was not put in for a Medal of Honor. Wasn’t put in for a Navy Cross, but was put in for a Silver Star.”

After that realization, Rigg knew he wanted to help Jackson’s family get their father the Medal of Honor.

“I was pretty shocked,” Rhonda Doak, Jackson’s oldest daughter, said after hearing from Rigg. “Off and on over the years people have said that my dad deserves a Medal of Honor.”

While Jackson died in 2007 at the age of 82, Doak and her siblings — Harry Jackson Jr. and Kay Gramling — took up the cause.

Making the best of it

The war left Harry Jackson Sr. with a hook for a right arm, a prosthetic leg, a glass eye and distinctive “blue freckles” all over his body. Powder burns.

After leaving the military, he married Nora in 1948 and had three children. The couple later divorced, but remained on good terms, according to his son. He celebrated holidays with his ex-wife, her new husband and the kids, Harry Jackson Jr. said.

“My mom was the only woman he truly loved in his life,” Harry Jackson Jr. said. “They were great friends always. Even the day he died, my mom had gone up to visit him at the hospital the afternoon before.”

All three children said their father lived his life as best he could, taking a job as a supply clerk at Naval Station Norfolk. He was a fairly strict father, they said, but he was very loving.

The children said he also had a good sense of humor and would sometimes joke about his injuries.

If a kid stopped and stared at a store or movie theater, Jackson would take it in stride and show the child how his arm worked, his son said.

And after hearing a few people call him “Captain Hook,” Jackson eventually embraced the name as his own. When he took a trip across the country in a Winnebago later in life, he used the epithet as his call sign on the CB radio.

While recalling his father’s temper, Doak said he also would come home from work every Friday with a chocolate bar that they would split.

“He’s just a great guy,” she said through tears.

Petitioning for the Medal of Honor

Rigg has written five books about WWII and Medal of Honor recipients. He knows a few things about who merits one.

And for him, Harry Jackson Sr. is more than due.

“Out of all the guys I’ve documented, which have been hundreds, he is the most deserving of anyone I have studied. It’s very black and white,” Rigg said. “He jumped on a grenade and smothered it with his body.”

With the dispatches from Dashiell as evidence and the fact that others got the Medal of Honor for similar action, Rigg set the family in motion.

Actually turning Jackson’s Silver Star into a Metal of Honor isn’t easy, though. Under federal law, once an award nomination has been considered and approved by the awarding authority, the decision becomes final.

The only way to get an award upgrade is to get the officer who originally nominated the service member — or another officer in the chain of command — to submit new, substantive information that was not available at the time. A member of Congress must then make a formal request.

The award package must include when the actions took place and two notarized eyewitness statements to the event.

Once the ball is rolling, Jackson’s nomination must go through several strict reviews, snaking its way through the Marines and past the Commandant of the Marine Corps and the Secretary of Defense. After all of that, the President must give final approval.

If someone says no, the nomination stalls.

A Marine spokeswoman said the process “is designed to mirror the process for current awards to the maximum extent possible.”

In Jackson’s case, Rigg believes the information from Dashiell’s dispatches should be enough. It is new and relevant because it includes an eye witness to the heroics, he said. The family also has enlisted the help of Sen. Tim Kaine, whose office has asked the family to send them documents related to what happened.

If the file is not complete, the senator’s office told Harry Jackson Jr. the investigator would typically tell them.

Time, however, is not on the family’s side. They still need a member of the 3rd Battalion of the 3rd Marine Division — preferably who served with their dad — to move forward. If every person with official standing to endorse a nomination is deceased, then no action can be taken, according to the law.

A steep hill to climb

Even if all goes perfectly and the family finds a living officer, the road to the Medal of Honor is still long and victory is far from certain.

Only one Marine has ever had an award upgraded to the Medal of Honor, and friends and family of other war heroes have found it difficult in recent years to win all the necessary approvals. The case of a Marine who allegedly used his dying breath to save his comrades from an enemy grenade in Iraq yielded only a Navy Cross.

“It is actually a faulty assumption that just jumping on a grenade is going to get somebody a Medal of Honor,” said Doug Sterner, a Vietnam veteran and military historian. “I’ve often said the difference between a Medal of Honor and a Navy Cross is the clerk who typed up the paperwork.”

He stressed “every veteran should realize whatever award they got, no matter how low in precedence and no matter how many of those awards were actually given to others, it’s still important.”

Harry Jackson Jr. said he and his siblings know what their father did and that it will be difficult to get his Silver Star upgraded.

But they still want to validate his sacrifices — just a little more.

“We will continue the journey to honor our dad,” he said.

Related: Lawmakers are pushing to finally award the Medal of Honor to the Black hero who saved dozens during D-Day