New Footage Shows Aftermath Of The MOAB Strike In Afghanistan

New footage came out on Thursday showing the aftermath of the Massive Ordnance Air Blast (MOAB) weapon that the US... 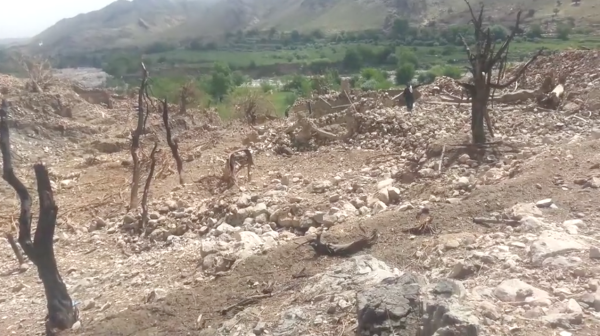 New footage came out on Thursday showing the aftermath of the Massive Ordnance Air Blast (MOAB) weapon that the US dropped on ISIS fighters in Afghanistan on April 13.

The video was taken by local Afghan police, who can be seen walking around the stone rubble and dead trees.

Security forces blocked access to the area for more than a week after the blast, and Afghan officials estimated that it killed about 100 ISIS militants.

Defense Secretary Jim Mattis, however, said that counting the “dead bodies is probably not a good use of our troops’ time.”

A few days after the strike, former Afghan President Hamid Karzai said that the strike was “an immense atrocity against the Afghan people, against fellow human beings.”

President Donald Trump said it was a “very, very successful mission.” A Fox News host also said that dropping the MOAB was “what freedom looks like.”

Check out what the MOAB did: