‘We were expecting the worst, but the Americans were totally unprepared. We had our choice of targets.’ 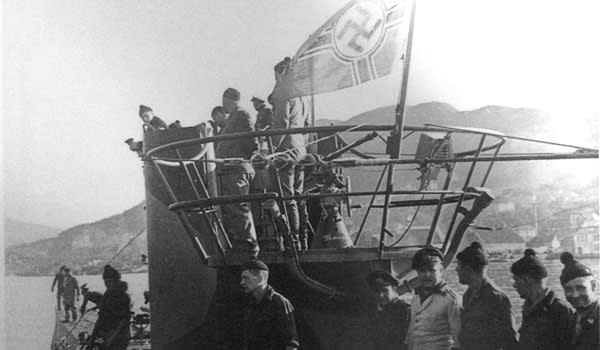 TAMPA — The attack on Pearl Harbor was not the only time that World War II made it to the United States.

For nearly a year, Nazi U-boat submarines patrolled the Gulf of Mexico and Atlantic Ocean seeking to kill Americans, disrupt merchant shipping and strike fear in the hearts of U.S. citizens.

They succeeded in the first two, sinking nearly 70 vessels, including ships coming to and from Tampa, and killing an estimated 700 crewmen. But it wasn’t until years later that the public learned of the severity of the Nazi presence.

September marks the 75th anniversary of the end of WWII. Using Tampa Bay Times archives, here is how the Nazis sought to bring terror to Florida:

Capt. Reinhard Hardegen was among the Nazis charged with leading the attacks for what the Germans dubbed “Operation Drumbeat,” which spanned May 1942 through April 1943.

He told the Times in 1992 that he initially thought it was a foolhardy mission.

“We were expecting the worst,” Hardegen, then 78, said. “But the Americans were totally unprepared. It was unbelievable how many ships we sank. We had our choice of targets.”

The submarines were so close to shore, he said, that his crew marveled at Coney Island’s Ferris wheel when it was lit up at night.

“It was something to see,” Hardegen said. “And then, farther down south, the resorts. The ships would be silhouetted against this and we could just fire away. It seemed too easy.”

The Nazis were so bold that they risked coming to shore. When some were arrested, they had movie tickets in their pockets.

“That is how close they got,” Rodney Kite-Powell of the Tampa Bay History Center said in 2014 when the museum featured an exhibit on Operation Drumbeat. “They came onto land.”

The Tampa Bay area was a prime target because it was home to three airfields where planes flew missions and because ships and tankers left Tampa’s port carrying aviation fuel and supplies.

Local waters were too shallow for the U-boats, so they attacked such vessels further out to sea. Overall, the Nazis sunk seven ships coming to or from the Tampa Bay area.

The attacks were close to the shores of Stuart. Lillian Rudd Davisworth told the Times in 1991 that she lived 10 miles inland from that city’s Atlantic Coast in 1942. She recalled thinking an earthquake was rattling her house.

“Things began to fall off tables, and our little dog started running around and barking,” she said. “We learned that a ship had been sunk by a German sub just south of Jupiter, and what we felt was shock waves from the torpedo.”

Paul F. Daniel Jr. was a druggist in Vero Beach at the time who also volunteered as a lookout for submarines.

“I saw more live warfare in Vero Beach the first four months of the war than I saw my entire duty in the Marine Air Corps in the Pacific Theater during the latter part of the war,” Daniel told the Times in 1991.

The SS Thompson Lykes of Tampa’s Lykes Steamship company was in the middle of the gulf when word of a sinking oil tanker due to a Nazi attack reached the crew via radio. They saved 18 survivors out of a crew of 40 and took them to New Orleans.

The U.S. government kept the severity of Operation Drumbeat from reaching the public. And some reporters who learned the truth were successfully coaxed by federal officials to downplay it.

“When someone would see an oil tanker burning off the coast of Louisiana or somewhere else, it would get reported, but not in a major way,” Kite-Powell said in 2014. “It would be treated like an isolated incident rather than part of a larger operation.”

Thousands of gallons of oil and gasoline from damaged petroleum tankers and other ships spilled into the water, the Times reported in 1990. “Many of the tar balls that still wash up on the beaches of Florida and the rest of the Southeast are the result of slow leakage from some tankers sunk by the German submarines,” the paper reported.

Daniel recalled an occasion when “the beach was black with oil. Once there were so many empty oil drums washing ashore, they had to bring out the high school seniors to help collect them and load them on a truck.”

Although Pearl Harbor marked the entrance of the United States into the war and remains a strong symbol, the U-boat attacks were militarily far more dangerous, University of Florida professor Michael J. Gannon, author of Operation Drumbeat, said in 1992.

“Looking back, though, Operation Drumbeat did not prove to be a successful German initiative,” Kite-Powell said. “There were never enough U-boats to pose a serious threat to American shipping, and difficulty in repairing and resupplying the German submarines continually hampered the German navy’s efforts. Four out of the 15 U-boats assigned to the Gulf were sunk and, unlike the merchant seamen, there were no survivors when a submarine sank. In all, 157 German crewmen lost their lives in the Gulf during World War II.”