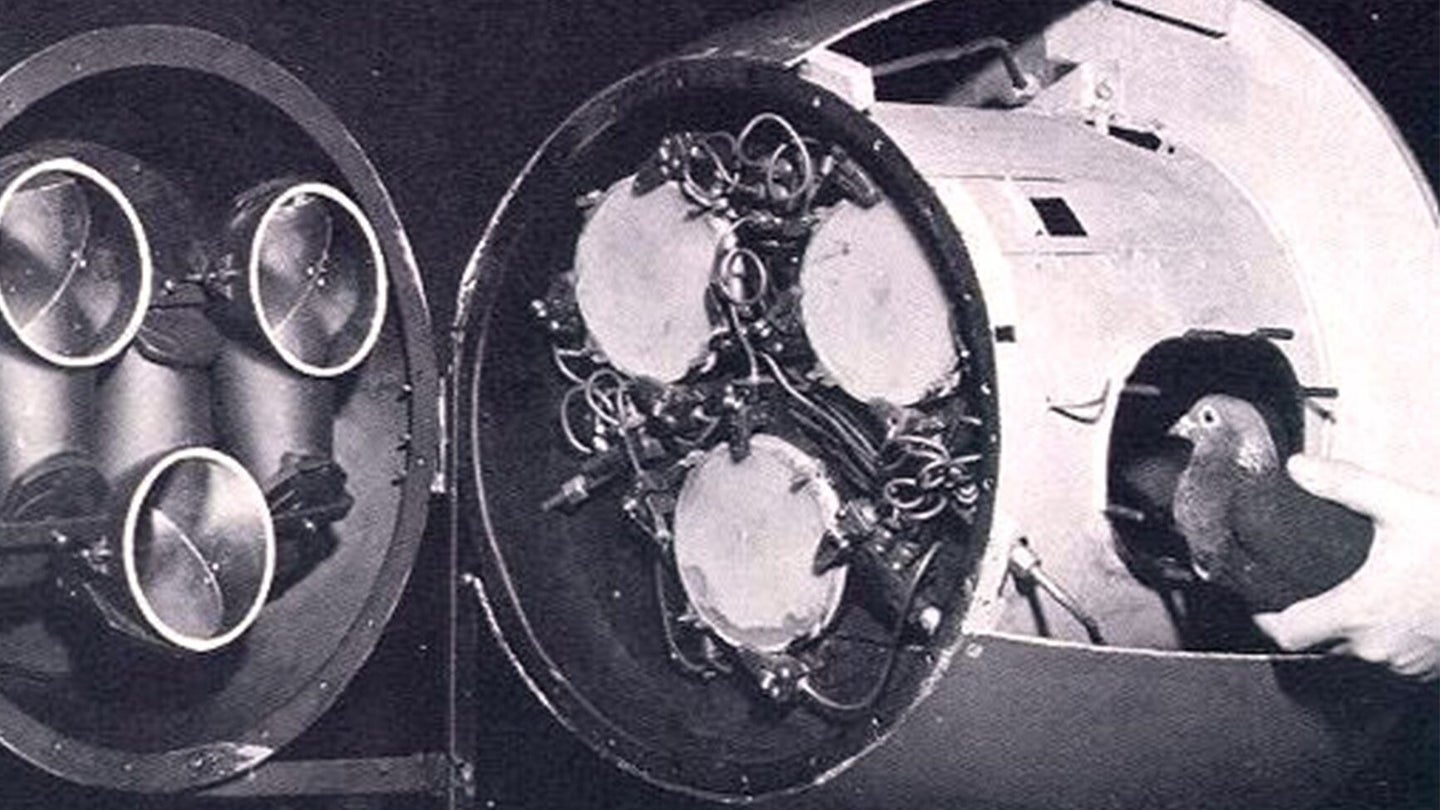 One of BF Skinner's homing pigeons next to the guidance system of the "Pelican" missile. (Wikimedia Commons).
SHARE

In 1943, the U.S. military had a problem. It didn’t suffer from a lack of bombs and missiles, but there was no reliable way to accurately guide them for a precision strike. A psychologist, though, had a solution: use pigeons to get the job done. Thus, Project Pigeon was born.

B.F. Skinner was a professor at the University of Minnesota at the time and specialized in understanding the psychology of human behavior. Homing pigeons had, of course, long been used in military service, as they could be trained to fly from one place to another. In 1940, Skinner began experimenting with the birds, devising an experiment in which they could be used to guide another object.

The experiment was relatively simple. The pigeons were placed in a harness, and as they pecked away at a small grain dish, their head movements would steer a small cart towards a bullseye. The experiments progressed to having the pigeons guide their harnesses toward other targets, like small ship models. Soon enough, Skinner had his pigeons training to steer towards pictures moving across a screen.

At first, Skinner couldn’t get the military interested, but in June 1943, the Office of Scientific Research and Development gave General Mills Inc., which was funding Skinner at that point, a small contract to try and develop his proposed pigeon guidance system. Skinner later described the project as “a crackpot idea, born on the wrong side of the tracks intellectually speaking, but eventually vindicated in a sort of middle-class respectability.”

The pigeons — Skinner had determined that they worked best as a trio — would be placed in the nose cone of a missile, which was dubbed the “Pelican.” Each pigeon would be looking at a small electronic screen that would display the ground ahead of the missile. As the pigeons would peck away at the target, small pulleys attached to their heads would steer the missile. Unfortunately for the pigeons, they would be along for the ride up until the moment of impact.

Skinner wasn’t allowed to see exactly what kinds of missiles the pigeons would theoretically guide — that was classified — so he had to make an educated guess. But the experiments still proved remarkably successful. The pigeons were quite adept at identifying and homing in on targets and were not affected by noise, temperature swings, or altitude changes in the Pelican. Still, after a 1944 demonstration, the project was shut down. The pigeon-guided missile was apparently too far-fetched of an idea even for the Army.

“Further prosecution of this project would seriously delay others which in the minds of the Division would have more immediate promise of combat application,” read the rejection letter.

Remarkably, this wasn’t the end for Project Pigeon. In 1948, the Navy revived the idea of using pigeons to guide anti-ship missiles, renaming it Project Orcon, or “organic control.” Fortunately for the pigeons, though, it was terminated in 1953, as technological advances in guidance systems mitigated the need for an organically controlled missile.

Skinner would continue on to a distinguished career as a psychologist and academic, his pigeon-guided missile never having gotten off the ground. He kept the pigeons, though, and reported that even six years later, they could still identify their targets.