Call it Grand Theft Auto: Abkhazia Following the military invasion of Georgia in August 2008 to “liberate” the self-proclaimed independent... 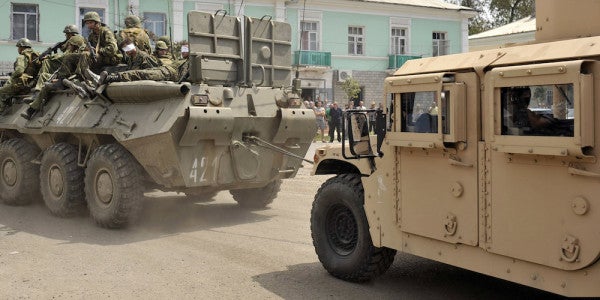 The Humvees, belonging to the 6th Communications Battalion detachment of the 4th Marine Logistics Group’s Military Police Company, were seized along with what the Washington Times described as “sensitive communications and electronics equipment” from a shipping container in the critical Black Sea port of Poti, where they were awaiting transport back to the United States following a joint U.S.-Georgian military exercise the previous month that, apparently, did little to deter the looming invasion.

Here’s how the seizure went down, according to a contemporary account in The Independent:

In Poti, on the Black Sea, Russian forces blocked access to the naval and commercial ports this morning and towed the missile boat Dioskuria, one of the navy's most sophisticated vessels, out of sight of observers. A loud explosion was heard minutes later.

Five Humvees may seem like no big deal: Then-Marine Corps Commandant Gen. James T. Conway stated that the Humvees included four “conventional vehicles” and one up-armored variant, while U.S. European Command spokesman Navy Lt. Corey Barker told Marine Corps TImes at the time that the vehicles contained “no advanced tracking technology or cryptology hardware.” (Anatoly Nogovitsyn, Russia’s deputy chief of the staff at the time, told Russia Today that the military had found “a lot of interesting stuff” in the vehicles.)

But dammit, we wanted our Humvees back! “I think we’re going to send the Russians a bill and tell them, you know, either pay up or give us back our vehicles, guys,” Conway said at the time. “You know, that’s not the way we do business.”

Eventually, we forgot about those stolen Humvees. Barack Obama won election to the presidency a few months after the 2008 invasion of Georgia and sought a reset with the Russian government; by 2010, as the new Strategic Arms Reduction Treaty started working its way through the Senate, lawmakers slapped down a measure that would require the return of “all military equipment owned by the United States that was confiscated” during the invasion.

So what happened to those Humvees? According to an Associated Press report from that time, Nogovitsyn said that Russia considered the Humvees “war trophies” and “thus has no obligation to give them back.” All of which is to say that the U.S. and Georgian forces currently participating in the NATO-led Noble Partner multinational training operation may want to invest in a Club or two. Y’know, just in case.

georgia
History
How The Other Half Fights
humvees
military tech