Radical Firearms has unveiled its new machine-gun suppressor, which was recently selected to be evaluated under a Joint Special Operations Command (JSOC) program 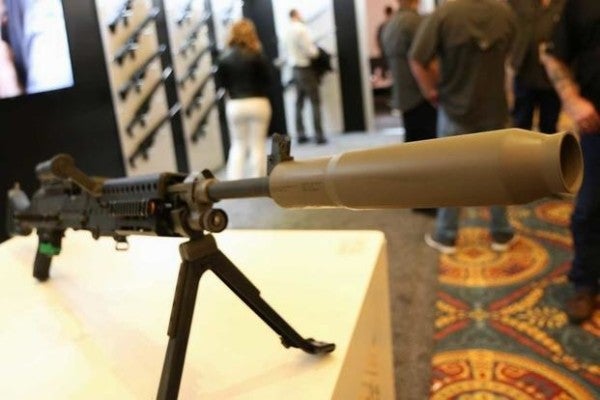 LAS VEGAS — Radical Firearms has unveiled its new machine-gun suppressor, which was recently selected to be evaluated under a Joint Special Operations Command (JSOC) program.

It runs 250 to 300 degrees cooler than other suppressors on the market, said David Spector, chief operating officer for Radical Firearms.

“They have approached us and requested the suppressor for testing,” he said.

The 240 FVS operates on the same principle as the 1906 Lewis, a light machine gun that saw extensive use during World War I, Spector said.

“It creates a high-pressure shock wave in the machine gun itself and pulls air through it to cool the machine gun,” he said. “This is an air-cooled suppressor; it's based off the Lewis Gun.”

That type of technology has been abandoned for years, Spector explained.

“Firms have gone to more robust materials … and they think that they can defeat heat. Well, heat is a booger,” he said. “Additive manufacturing allows you to … eliminate traditional machining, and it's kind of the sky's the limit.”

Spector admits that the 240 FVS is “actually pretty heavy” at four pounds, but he is confident that it outperforms other suppressors on the market.

“When we have done testing … some of these other cans that say 'they breathe and do things' — they actually run really hot and they start melting,” he said.

The 240 FVS is designed to form what is known as the Venturi effect, which creates a vacuum for heat and pressure.

“What we do with this suppressor is we stop back pressure on the barrel and the bolt by creating a secondary channel which … vents out of the front,” he said, explaining how the suppressor forces cooler air through with each round fired.

“With this, you have air channeling over the entire suppressor, pulling that heat away from the suppressor,” Spector said.