45 Years Ago, The US Almost Fought A Nuclear War With Syria And Russia

On the night of October 24, 1973, came the dreaded words: Assume Defcon 3. On bases and ships around the world, … Continued 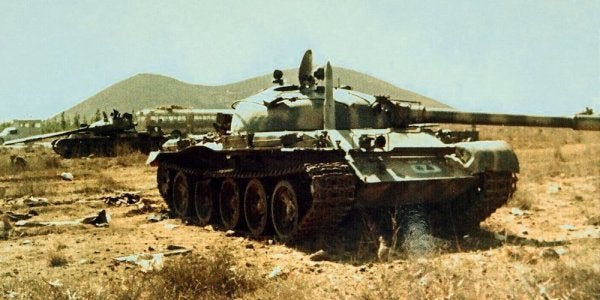 On bases and ships around the world, U.S. forces went to Defense Condition 3. As paratroopers prepared to deploy, B-52 nuclear bombers on Guam returned to bases in the United States in preparation for launch. On another October day eleven years before, the United States had gone to the next highest alert, Defcon 2, during the Cuban Missile Crisis.

This time the catalyst of potential Armageddon wasn't the Caribbean, but the Middle East.

In fact, the flashpoint was Syria. And as tensions rise today between America and Russia over the Syrian Civil War, and U.S. and Russian troops and aircraft operate in uncomfortable proximity in support of rival factions in the conflict, it is worth remembering what happened forty-five years ago.

One of the most remarkable aspects of the Cold War is what didn't happen: the United States and the Soviet Union managed to avoid fighting each other directly, and instead waged their conflict through proxies.

But as usual, the Middle East upset the status quo. On October 6, 1973, on the Jewish holy day of Yom Kippur, Egypt and Syria launched a surprise attack on the Sinai and the Golan Heights. The stunned Israeli defenders held on desperately, even as their leaders and senior commanders feared this might be the end for their nation. Meanwhile, the Soviet Union, followed by the United States, airlifted in massive amounts of military equipment and supplies.

By October 11, Israel had halted the Syrian offensive: Israeli armor and infantry had crossed into Syria, and would eventually advance to within artillery range of Damascus. In the Sinai, an Israeli force, led by the flamboyant and aggressive Gen. Ariel Sharon, had stealthily crossed the Suez Canal on October 15 and seized a bridgehead on the Egyptian side of the waterway. This time it was the Egyptians who were surprised as their Third Army found itself trapped in its positions on the Israeli side of the canal, its supply lines cut.

With attempts at working out a ceasefire failing, and with their Arab clients facing military defeat, Soviet leader Leonid Brezhnev sent a message to Richard Nixon's White House: “I will say it straight that if you find it impossible to act jointly with us in this matter, we should be faced with the necessity urgently to consider taking appropriate steps unilaterally.”

A crisis atmosphere gripped the White House as reports arrived that that Soviet airborne divisions and amphibious troops had been placed on alert, while Moscow nearly doubled its Mediterranean fleet to a hundred ships. The Minister of Defense, Marshal Andrei Grechko, “recommended in particular that an order be given to recruit 50,000-70,000 men in the Ukraine and in the northern Caucasus,” recalled Soviet Foreign Ministry official Victor Israelian. “His view was that, in order to save Syria, Soviet troops should occupy the Golan Heights.”

After having just extricated itself from Vietnam, America was in no mood for another war. Yet, the White House felt it could not risk the loss of prestige and influence—especially in the oil-rich Middle East. “We were determined to resist by force if necessary the introduction of Soviet forces into the Middle East regardless of the pretext under which they arrived,” Secretary of State Henry Kissinger recounted in his memoir Years of Upheaval.

It may or may not have been coincidental—and cynics wondered—that the U.S. alert came as Nixon's presidency was beginning to crumble under the Watergate scandal. Nonetheless, Moscow appeared ready to cross a red line that Washington could not allow.

In the confined waters of the Mediterranean, the tension was palpable. “Nerves in both fleets frayed,” wrote Abraham Rabinovich, a historian of the 1973 October War. “The solitary Soviet destroyers that normally shadowed the carriers—'tattle tales' the Americans called them—were reinforced by heavier warships armed with missiles. Although ranking officers had never before been noted on the tattletales, the Americans now became aware of two admirals on the ships following them. The Americans, in turn, kept planes over the Soviet fleet prepared to attack missile launchers being readied for firing. Both sides were aware that their major vessels were being tracked by submarines.”

Soviet leaders were shocked by the American response. “Who could have imagined the Americans would be so easily frightened?” asked Soviet premier Nikolai Podgorny, according to Rabinovich in his book The Yom Kippur War. Soviet premier Alexei Kosygin said “it is not reasonable to become engaged in a war with the United States because of Egypt and Syria,” while KGB chief Yuri Andropov vowed, “we shall not unleash the Third World War.”

The guided-missile cruiser USS Monterey (CG 61) fires a Tomahawk land attack missile April 13. Monterey is deployed to the U.S. 5th Fleet area of operations in support of maritime security operations to reassure allies and partners and preserve the freedom of navigation and the free flow of commerce in the region.

Whatever the reason, the Soviet kept their forces on alert but agreed not to dispatch troops to the Middle East. By the end of October, a tenuous ceasefire put an end to that chapter of the Arab-Israeli conflict.

In the forty-five years since that troubled autumn of 1973, the world has changed. The Soviet Union is no more, Egypt is a U.S. ally, and Syria…well, is not Syria anymore. But it not hard to imagine a scenario where the superpowers—or rather one current and one former superpower—find themselves at odds again. For example, Israel may strike Syria in order to drive out Iranian and Hezbollah forces that are edging toward the Israeli-Syrian border. Russia could choose to intervene to save its Cold War client, perhaps by providing air or air defense cover, which leads to a real or threatened clash between Israeli and Russian forces.

As in 1973, it is hard to imagine that Washington would allow the Russians to get away with attacking its Israeli ally.

But what was really different about the 1973 crisis? Nixon and Brezhnev weren't firing belligerent Tweets at each other (heck, tweets back then were something that birds did outside your window). There is little reason to be nostalgic for the cynical realpolitik game of the Cold War. But at least the game had rules, and the players were conscious that a false move could end in mutual annihilation. Cooler heads prevailed, and the crisis was resolved.

Imagine such a crisis now, with Trump's prickly belligerence and Putin's macho nationalism. This time, the world might not be so lucky.