"The truth is that I never killed anybody with an entrenching tool." 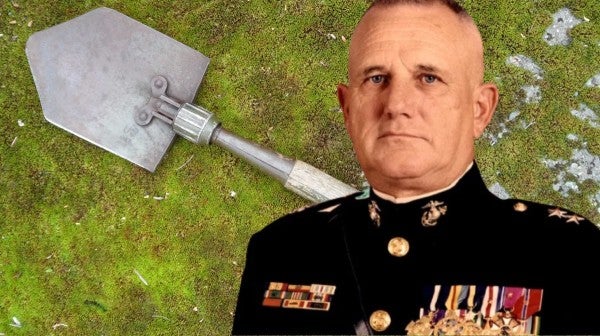 Editor’s note: This article was originally published on March 28, 2016.

There’s a famous Marine Corps story from the Vietnam War, where a Marine got a confirmed kill with a small collapsible shovel, called an entrenching tool, or E-tool.

According to one legend, Maj. Gen. Ray Louis Smith was a young officer leading a group of Vietnamese Marines through enemy lines when they were spotted by an enemy scout. Smith sprung into action and killed the man with an E-tool to minimize noise.

Other tellings of the story involve a brutal gun battle during which Smith’s primary and secondary weapons malfunctioned. Smith then turned to an entrenching tool to dispatch his foes.

Both stories are untrue. Smith never killed a man with an E-tool. However, his battlefield heroics are no less extraordinary for that fact. In fact, what he actually did was far more impressive, selfless, and heroic than killing a man with a shovel.

Smith, now 70 years old, boasts a 33-year military career that began with his enlistment in the Marine Corps in 1966, and ended with his retirement in 1999. He deployed twice to Vietnam, served in Grenada and Beirut, is a Navy Cross recipient, has two Silver Star Medals, a Bronze Star Medal for valor, and received three Purple Hearts for injuries sustained in combat.

“The E-tool story is a legend,” Smith told Task & Purpose. “At least back in my young days in the Corps, we had a definition for a legend: A Marine Corps legend was a pack of lies that was built on an original kernel of truth. The truth is that I never killed anybody with an entrenching tool. I killed a few that I could have killed with an entrenching tool, but I never did.”

The true events the story is based on occurred between late March and early April of 1972 during Smith’s second tour in Vietnam. According to his Navy Cross citation and personal recollection, he was acting as an advisor to a group of approximately 250 Vietnamese Marines on a remote outpost in Vietnam. After intense and unrelenting combat, during which poor weather conditions prevented air support, Smith attempted to lead 28 Vietnamese troops back to friendly lines.

As they reached the enemy’s outer defensive line they came across a razor-wire barrier infested with booby traps and were discovered by an enemy soldier who opened fire. Acting swiftly and without hesitation, Smith moved forward, pressed the barrel of his rifle into the man’s belly and shot him at point-blank range, killing him. Then Smith used his own body to clear a path through the wire, laying on top of it so his men could walk over him and cross to safety, before following them out of the kill zone.

This is “the kernel of truth” that eventually grew into legend.

The myth began to take form after Smith returned stateside and was assigned to The Basic School in Quantico, Virginia.

“The E-tool legend I think got started by some of my fellow instructors when I was teaching at The Basic School after my time in Vietnam and the lieutenants spread it throughout the Corps and it never died,” he said.

Smith added that he believes the legend may have had to do with the original wording of his citation, and the fact that his fellow instructors would embellish stories for the sake of it.

“The wording in the citation I think is, I ‘eliminated’ him and I believe that some of my fellow instructors elaborated on that for me by telling the lieutenants I eliminated him with an entrenching tool,” Smith said. “I think that’s where the thing started.”

He admits that he may have indirectly played a role in the story’s spread. When Smith took over instruction on patrolling at the school, he saw that many of the young lieutenants were spending a month’s pay on expensive combat knives.

“I was trying to ‘poo poo’ all that stuff and eliminate it, and I know I did more than once tell the lieutenants they didn’t need to spend three or four hundred dollars on a damn fighting knife,” Smith said. “The Marine Corps would issue them a knife if they needed one and if they didn’t have a knife, the Marine Corps was certainly going to issue them an entrenching tool which was a better fighting instrument than any knife, which I do believe. But that wasn’t based on the fact that I killed anyone with an E-tool, it was just an opinion. So it was a combination of things like that, is how it got started.”

As the legend spread, Smith earned the moniker “E-tool Smith,” which he said he first heard while at 2nd Marine Division in the early 1980s and initially didn’t know where it came from.

“People called me that throughout my entire career, but if anyone ever asked me about it, I always tell them the truth, but legends don’t die easy in the Corps,” Smith said, adding, “a lot of people that know it’s not true, even today continue to verify it.”

The legend’s persistence isn’t surprising. It’s an incredible story, but more than that, it feeds back into the Marine Corps’ mythology — something Smith said he feels is good for the Corps.

Smith explained that legends provide future Marines something to strive toward.