For those who serve, war is surreal, but celebrating Christmas while in a combat zone can be particularly somber. This... 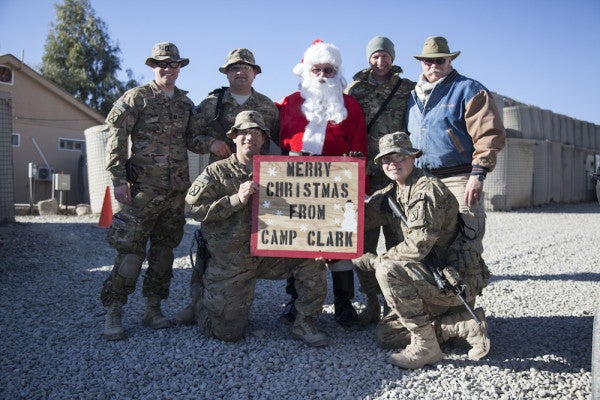 For those who serve, war is surreal, but celebrating Christmas while in a combat zone can be particularly somber. This time last year, I was on a different continent, and instead of a Santa hat, I wore protective plates and a kevlar helmet. Just to feel somewhat festive, many of us decorated our vests with battery-powered Christmas lights and placed candy canes in our equipment. Under the threat of imminent danger at our deployed location, Christmas was surreal indeed, but we coped.

The surrealness of celebrating Christmas while in a war is not a new experience. Through American history, our troops have endured the holidays while serving far from home in a lot of different ways. Sometimes highlighted with humor, it has also been cause for melancholy. But in countless cases, there was no celebrating — only danger, fear, and death.

One of the most famous Christmas days in American military history occurred in 1776. That night, Gen. George Washington made his iconic crossing of the Delaware River from Pennsylvania into New Jersey, and marched his army toward Trenton. The next morning, he surprised 1,500 Hessian forces fighting for the British, many of whom were alleged hungover from holiday celebrations the night before. The Hessians couldn’t get their units organized in time, and Washington’s army ended up capturing more than a third of the enemy force, suffering only two deaths and five wounded. Prior to the battle, however, the Continental army had suffered some significant defeats and morale was in the gutter. Americans at the Valley Forge winter camp had also been suffering greatly. Soldiers were dying without proper food, clothing, or other provisions, and the King’s armies (as well as American colonial citizens) suspected the Continentals were near a full defeat. No doubt the poor morale and prospects of another defeat — at Christmas time, no less — weighed heavily on the minds of American soldiers. But their actions at Trenton, followed by a similar victory at Princeton a week later, electrified people across the colonies. Washington handed two sound defeats to the most powerful fighting force on the planet, and to Americans, independence suddenly became a real possibility. Morale in the ranks shot into the stratosphere and soaring enlistments followed.

The American Civil War was another war in which U.S. soldiers spent Christmas in conflict. It was a painful time in our history, marked by lofty victory and shocking loss. Probably the most famous Christmas “gift” during the war was from Gen. William T. Sherman to President Abraham Lincoln. In December 1864, Sherman was reaching the end of his controversial “March to the Sea,” and on the Dec. 22, his army captured the city of Savannah, Georgia. Sherman wrote a letter to Lincoln that read in part: “I beg to present you, as a Christmas gift, the city of Savannah, with 150 heavy guns and plenty of ammunition, and also about 25,000 bales of cotton.” Lincoln naturally received the message with great relief, replying, “Many, many thanks for your Christmas gift – the capture of Savannah… the undertaking being a success, the honor is all yours.”

Both Union and Confederate troops found creative ways to celebrate Christmas while on the battlefield. Personal letters of many soldiers describe units erecting Christmas trees and decorating them with stale hard-tack (a large, saltine-like biscuit that served as a form of ration) and salt pork. Carols we recognize today were sung in camps across the continent — tunes such as “Hark, the Herald Angels Sing,” “Jingle Bells,” and “Deck the Halls” — and while cards didn’t enjoy widespread use until the 1870s, elaborate Christmas cards were known to be exchanged.

Perhaps the most eventful Christmas during the Civil War occurred December 1862 during the Fredericksburg campaign. During the Dec. 12 battle on the plains south of town, Union troops, under Gen. Ambrose Burnside, made repeated suicidal assaults against the entrenched southern Army on Marye’s Heights, resulting in more than 12,000 Federal casualties — more than double that of Robert E. Lee’s. Burnside withdrew after the spectacular defeat, but tried to restore his tarnished reputation the next month in what became known as the “mud march.” In an effort to follow up with a second campaign against Lee, the Union again tried to hit its enemy south of the Rappahannock River, but a brutal two-day rainstorm turned the crossing into a mucky quagmire that swamped horses, artillery, and men in the cold mud. Resigned to his failure, Burnside again pulled back and was fired by Lincoln soon after. It was a terrible Christmas for the Union army, yet one that the South used to find reason to celebrate.

Brig. Gen. Anthony McAuliffe and his staff gathered inside Bastogne's Heintz Barracks for Christmas dinner Dec. 25th, 1944. This military barracks served as the Division Main Command Post during the siege of Bastogne, Belgium during WWII.

Fast forward to Dec. 16, 1944 — forever known as the Battle of the Bulge. A legion of Hitler’s troops overran thinly spread American lines along the border areas of Belgium, Luxembourg, and Germany, and advanced toward the port of Antwerp. It was the coldest winter in at least 100 years and temperatures had plunged below zero. The outnumbered, outgunned, and poorly equipped Americans put up a gallant fight and delayed the Nazi timetable, but casualties were alarming. It would be a terrible Christmas for many families back home. By Christmas Day, Gen. George Patton and the 3rd Army had swung northward, mounting a major counteroffensive that ultimately pushed the Germans back by New Year’s. That year though, many American soldiers in Europe spent their time trying to keep warm and ate frozen food (if they had any at all) because they weren’t allowed to light fires. Others on the front lines didn’t even know it was Christmas. Despite the death and devastation, though, combined enemy voices sang versions of “Silent Night” in many locations across the icy lines of battle.

Christmas is indeed a strange time at war. Our troops will often cope in ways that many of us would consider funny, or even morbid, but through our nation’s history, the holidays at war have often been fraught with sacrifice.

This Christmas, take a moment to remember our veterans, as well as those today who are defending our liberties far from home. Historically, as well as today, our troops have stood guarding the gates of freedom, protecting the things we hold dear, and our way of life, no matter the time of year.