The US Naval Academy just made a startling discovery recalling the violent past between the US and North Korea's Kim... 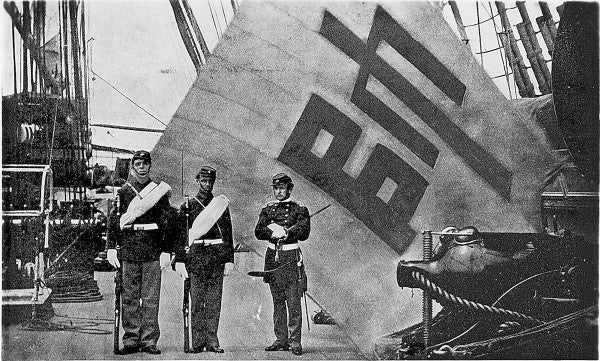 The US Naval Academy just made a startling discovery recalling the violent past between the US and North Korea's Kim dynasty while moving around some old war memorabilia.

When reshuffling some old war trophies in the academy's Mahan Hall, staff found old Korean battle standards in the framework that hadn't been opened since 1920, the US Naval Institute's news service reports.

The flags recall a bloody history of US-Korean relations, and actually belonged to a Kim Ung U — a direct ancestor of Kim Jong Un.

The story starts in 1866, when a US merchant ship arrived in Pyongyang to try and open Korea up to trade. Fearing the Westerners had come to sack their temples, the Koreans killed the crew and burned the ship, according to the Institute.

Five years later, five US warships returned on a mission to establish diplomatic relations, but the Koreans fired on them. The US Marines responded and seized several coastal towns, taking some of the flags with them, according to the Institute.

The US sent the flags to the Naval Academy, and simply forgot about them for almost a century.

Today, when the tensions between the US and North Korea seem higher than ever before, the rediscovery of these flags points to a long, violent history between the two feuding states.