President Donald Trump is reportedly adopting a new strategy in Syria that will see U.S. troops remain there indefinitely. Now... 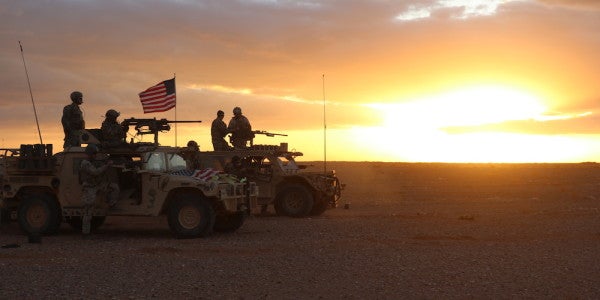 President Donald Trump is reportedly adopting a new strategy in Syria that will see U.S. troops remain there indefinitely.

Now that the terrorist group ISIS has largely been driven into the desert, the Trump administration wants to focus on ensuring all Iranian forces leave Syria moving forward, a representative for the State Department said in early September.

James Jeffrey, a retired foreign service officer who was recently tapped by Secretary of State Mike Pompeo to be his representative for Syria engagement, told reporters, “The new policy is we're no longer pulling out by the end of the year.”

He added, “That means we are not in a hurry.”

Jeffrey said he's “confident” that Trump is on board with this new plan, which he said will involve a “major diplomatic initiative” in the United Nations and beyond. This all comes just months after Trump said he wanted to pull U.S. forces out of Syria. “I want to get out,” Trump said in April, “I want to bring our troops back home.”

Over the course of the seven-year war in Syria that has decimated much of the country, Iran and Russia have been Syrian President Bashar al-Assad's closest allies. At present, Assad is close to achieving victory as his forces attack the last rebel stronghold in the country in the city of Idlib.

Meanwhile, Iran recently reaffirmed its commitment to the Assad regime. Iranian Defense Minister Amir Hatami in late August said Iran would have “presence, participation and assistance” in the reconstruction of Syria, adding, “and no third party will be influential in this issue.” The U.S. is staunchly anti-Assad, but has made it clear it will not pursue regime change.

In short, Assad isn't going anywhere and Iran is poised to stick with him for years to come. Based on the Trump administration's new policy, this also means the U.S. won't be leaving the country anytime soon even as the war is seemingly winding down.

There are currently about 2,200 U.S. service members stationed in Syria, where tensions with Russia are on the rise.

Trump has addressed the situation in Syria more and more in recent days, issuing stern warnings to Assad and Russia regarding the assault on Idlib.

Related: The Russian Military Backed Down In Syria After The US Marine Corps Called Their Bluff »

Trump in the past has already approved limited missile strikes against Assad, prompting suggestions he might use military force again if the Syrian leader employs chemical weapons.

“We've started using new language,” Jeffrey said on September 7, adding the use of chemical weapons will not be tolerated by the US “period.”

National Security Adviser John Bolton on Monday reaffirmed the Trump administration's new policy on Syria while at the United Nations in New York. He made it clear the U.S. military will have an indefinite presence in the war-torn country.

Bolton said U.S. troops are not leaving Syria “as long as Iranian troops are outside Iranian borders.”