13 Striking Vintage Wartime Posters That Appeal To Mercy, Honor, And ‘Gold And Glory’

Wartime posters are often striking, evocative images. “The function of the poster today is to appeal to our subconscious feelings … Continued 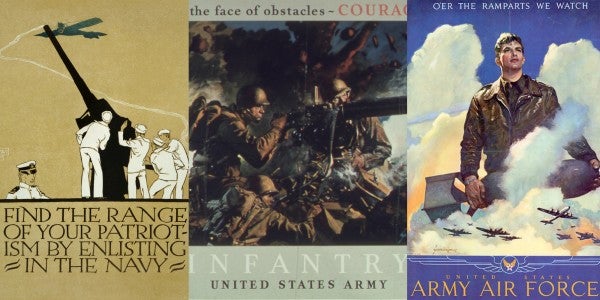 “The function of the poster today is to appeal to our subconscious feelings and our barely conscious needs and channel them so that we do what the sponsor of the poster wants us to do,” writes Max Gallo in “The Poster in History.”

Given the likelihood of devastation and mass loss of life in war, it takes a powerful illustration to convince people to support a war effort.

Online retail site Abebooks recently rounded up a collection of US, English, and Chinese vintage posters from the Mexican Revolution, WWI, and WWII. Many sought to push men to enlist, encourage women to volunteer, and convince everyone on the home front to make financial contributions.

In order to accomplish those goals, these posters appeal to just about everything, including honor, mercy, and “gold and glory”:

Charles Buckles Falls illustrated this WWI recruiting poster, which depicts the commanding gaze of a beckoning sergeant, for the U.S. Marines.

This 1920 poster dangles “gold and glory,” along with famed Mexican revolutionary Pancho Villa, to encourage U.S. citizens to travel south and fight in the Mexican Revolution.

Lady Liberty stands tall in this 1917 war poster, which encouraged Brooklynites to serve in a branch of the U.S. military.

This 1917 Women's Land Army poster depicting a dutiful woman doing farm chores was published in London to encourage women to work the land in place of men who had gone to serve in WWI.

Published around 1917, this urgent poster tells women their country needs them to support the U.S. Navy — through clerical work.

This WWI era poster illustrates U.S. Marines firing artillery from a ship in the frenzy of battle to encourage people to enlist at a New York City recruiting office.

Not all posters spurred individuals to enlist. Published around 1942, this poster published by a lobbying group of the National Lumber Manufacturers Association features Uncle Sam encouraging wartime lumber production.

The Department of Commerce's National Inventors Council sought to encourage wartime innovation with this 1942 poster.

And a benevolent U.S. Army nurse ministers to a soldier recover in this 1945 work, which seeks to recruit women for a “glorious service of mercy.”