"I think the people who felt it the most, probably were the mothers and wives of sons and husbands who had been in actual combat." 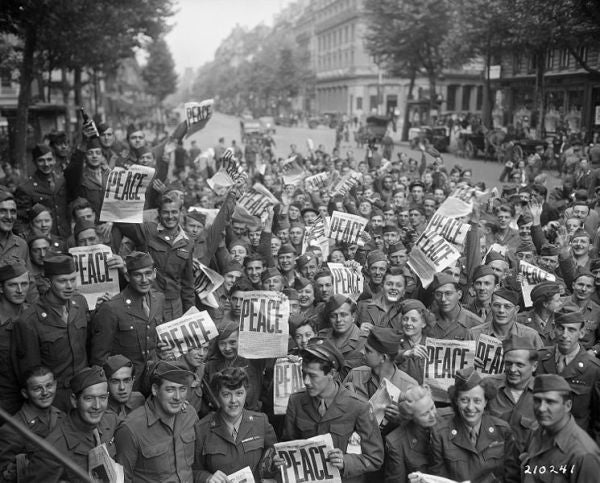 Many might know Melvin Hurwitz for his ties to the family-owned Colonial Jewelers in downtown Frederick.

But more than seven decades ago, Hurwitz, 95, was serving as a radio gunner and operator on B-17 planes in the European theater during World War II. He remembers the joyous scenes around Europe after Germany surrendered in May 1945, and flying back to America.

The war wasn’t over, though. Eventually, Hurwitz was sent to Cannon Air Force Base near Clovis, New Mexico, to train on B-29 planes in preparation for deployment to Japan, where fighting was still occurring.

Then, however, the U.S. dropped atomic bombs on Hiroshima and Nagasaki in August. Days later, on Aug. 14 or 15 — depending on time zone differences — surrendered, effectively ending the war. Saturday marks 75 years since that latter date, known as Victory in Japan, or V-J Day.

Being on an air base near a remote town close to the Texas border, there weren’t the joyous scenes from Times Square or elsewhere. But Hurwitz and others on the base were still relieved.

“It’s finally over,” Hurwitz said of the mood around the Clovis base. “The world was going through hell for five years.”

When V-J Day occurred, Inez Foley wasn’t thinking much about the end of the war.

And even with her personal life, the job wasn’t done for Foley or others working in intelligence for the U.S. Navy. Some took to the streets and celebrated the end of the war, but Foley and others still had to report to work in Washington, D.C.

“It was of course quite a demonstrative day, lots of people walking around in the street,” Foley said. “I didn’t take part in any of that … we still had our jobs to do, and it was a day to celebrate, but not everybody had the opportunity to celebrate it.”

Foley said her work was valuable during the war, but that others who celebrated in the streets that day probably had greater reason to do so.

“I think the people who felt it the most, probably were the mothers and wives of sons and husbands who had been in actual combat, and I never knew anything about actual combat,” Foley said.

George Delaplaine Jr., 93, was serving in the Navy and was at the Navy Pier in Chicago when Japan surrendered. He said the weather was nice, although still windy, as the Illinois metropolis always seemed to have a breeze running through it.

Chicago during WWII was a major interchange for those in the armed services, and when the war ended, he and others were given a three-day leave off the pier. As military police, it was their job to take those who had over imbibed, and transport them back to the pier to recover.

“When Japan was gone, the war was over, you could really get drunk,” Delaplaine said.

Related: The Last Surrender: What The US Should Learn From The End Of World War II

There were celebrations in the streets, especially downtown, but no formal parades, he added.

Much like Hurwitz, Delaplaine said it was a relief when Japan surrendered. Many soldiers in Chicago were in the process of coming back from fighting in Europe, and then were going to transfer to other bases nationwide before deploying to the Pacific theater to continue fighting in Japan.

Hurwitz said that appeared to be his fate before President Harry Truman decided to drop two atomic bombs on the island nation, helping end the war. He was thankful he and others who fought in the European theater wouldn’t have to endure more fighting in the Pacific.

“We went through hell in Europe and we thought we were done … but here we were, going to get ready for the next jump,” Hurwitz said.

After the war ended, Hurwitz didn’t have enough service time logged to be honorably discharged, so he was deployed to Camp Myles Standish in Taunton, Massachusetts, where he served until early 1946.

Historians now debate whether the bombings of Japan were just, but Americans weren’t debating it then, as it saved thousands of their lives.

“Whether it was the moral thing to do, everybody was talking about it,” Hurwitz said. “But 95 percent of the people at that time thought it was the right thing to do.”