When Arby L. Hambric speaks, the 89-year-old Navy veteran chooses his words with deliberate care and manages to flank each... 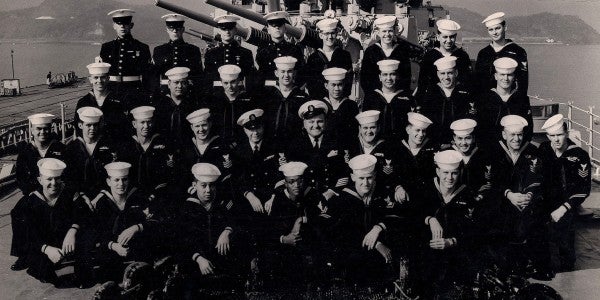 When Arby L. Hambric speaks, the 89-year-old Navy veteran chooses his words with deliberate care and manages to flank each statement with a polite affectation. If you wish him a good day, he quickly says, “You made it one,” and if you talk with him long enough, the conversation can start to feel like a competition over who can be more polite.

It’s a contest he wins every time.

Hambric was drafted into the Navy in 1945 and served until he retired in 1965. He served during World War II, Korea, Vietnam, and has traveled the world. He grew up poor during a time of Jim Crow-era politics, and went from picking cotton in the fields of Texas to serving dignitaries aboard U.S. Navy ships, to penning his memoir, “To Thee I See” in January 2015.

Now, he spends much of his day doing charity work for local veteran or church groups in Las Vegas, Nevada, where he lives.

Hambric’s story is one of brotherhood among service members and how that kind of bond is inherently at odds with racial bias and bigotry.

Related: How the first African-American Marine received the Medal Of Honor 47 years ago »

Hambric was born on the dirt floor of a one-room tin shack in Centerville, Texas, and grew up in neighboring Teague, where for a time, his family lived in a small patchwork house with a hole in the ceiling so wide he could see the stars at night. As children, Hambric and his siblings helped his family make ends meet by picking cotton.

When he talks about growing up in a time of Jim Crow laws, Hambric’s words aren’t tinged by anger. Instead there’s a mix of sadness or perhaps disappointment, tempered by a resolve to be neither discouraged or distracted. Jim Crow is a term used to refer to a system of government-sanctioned segregation and racial bias that existed in the United States until the late 1960s.

“I grew up believing that white people treated their dogs better than us, but I refused to allow this notion to interfere with my decision of whether or not to be friends with someone because of the color of their skin,” he wrote in his memoir, “To Thee I See.”

When he was 19 years old, Hambric was drafted into the Navy during World War II, and though his service began as an obligation, he chose to make it an opportunity.

“In Centerville and Teague, every opportunity for black folks came with a sacrifice of self, and any glimmer of hope was soon washed away by senseless acts of discrimination,” Hambric wrote. “The military would not serve as an inconvenience or obligation it would be a way out.”

Hambric was assigned to the USS Palau as a steward where his duties consisted of cooking, cleaning, and assisting the officers.

White sailors were ranked as seamen and not stewards, a title that was reserved for minorities, wrote Hambric. Even the ship itself was segregated, with black sailors restricted from parts of the vessel.

Though discouraging, Hambric told Task & Purpose that it didn’t catch him off guard.

“I didn’t even know that much about segregation throughout the country at that particular time,” said Hambric, who added that having grown up in the segregated South, “I just thought people lived that way throughout the whole country, the whole world.”

While his initial encounters with racism in the Navy may not have been surprising to him at the time, the memories remain poignant to this day.

“I can still remember in Norfolk, Virginia, where I spent five years, where they had places where no coloreds were allowed, or signs on the grass saying they’d rather have a dog than a black sailor, or something of that nature.”

Hambric was drafted when the Navy was still segregated, and continued serving after President Harry S. Truman desegregated the military on July 26, 1948.

While segregation may have officially ended, it wasn’t immediately clear.

“Even up until 1965, there were many years where you were involved with that segregation,” said Hambric. “It didn’t change overnight or after many years. Blacks were still segregated, they would have their own quarters or things like that. It was just signed in 1948, that segregation had ended. A lot of time, wherever you’re going, wherever you went, you were confronted with that kind of thing, especially as a black man.”

Hambric was frequently the only black sailor in his unit, and though that made him a man apart, and occasionally a target for discrimination, he said he had faith in his fellow sailors and in their shared bond: military service.

“I have never known a racial barrier to cause someone to turn his back on one another, because of his color, or any other thing,” said Hambric of the men with whom he served. “They would die for one another. I would give my life for them today if I had to serve all over again, and I’m sure they would do the same thing for me, just like that young white boy I was in the service with who saved my life.”

The instance Hambric referenced happened near the end of the Korean war, when he was stationed at an Air Force base in Iwakuni, Japan, as part of the VP-7 patrol squadron assigned to the Pacific Fleet.

“It was a hot day. I went to the swimming pool and did one of the most foolish things I ever did in my life and jumped off the board and into the swimming pool, knowing I was not a qualified swimmer,” Hambric said, adding that he was knocked unconscious the moment he hit the water’s surface and immediately sank to the bottom.

“There was this young sailor, this white sailor, who came down and got me off the bottom of the swimming pool. I didn’t know that I had collapsed down there until days later,” said Hambric. “That will live with me for the rest of my life.”

His rescuer's name was Hollinsworth, and while Hambric said he couldn’t recall his first name, he did visit the sailor and his brothers, who also served in the unit, at their home in Phoenix, Arizona, several times.

When asked if he faced discrimination from any of the sailors he served with in that squadron, Hambric’s response was an unequivocal no.

“No, no, no, no, no. In that particular squadron, that group, I was the only black in that squadron, and I guess, the way they treated me and the way we treated one another, we couldn’t treat one another no better, even right today, just like we were born sisters or brothers. … That’s just how we lived back then. We protected one another.”