Watch George H.W. Bush’s Rescue By The US Navy After He Was Shot Down By Japanese Forces During WWII

Prior to his presidency, George H.W. Bush served in the U.S. Navy as a pilot, and he flew on bombing missions against... 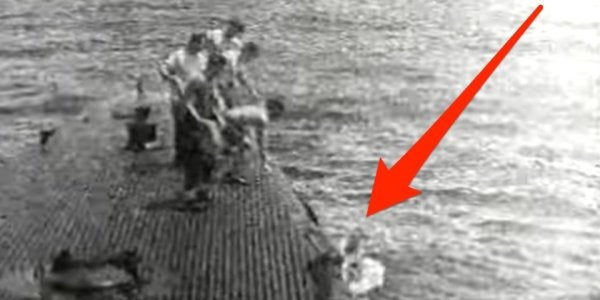 Prior to his presidency, George H.W. Bush served in the U.S. Navy as a pilot, and he flew on bombing missions against the Japanese during World War II.

Bush learned of the Japanese attack on Pearl Harbor as a teen, and six months later, on his 18th birthday, he enlisted in the U.S. Naval Reserve. He went on to become one of the youngest aviators in the Navy and was assigned a photographic officer with a torpedo squadron.

During an attack against Chichi Jima, a heavily fortified island that Japanese forces used for communications and supplies, Bush's aircraft, a TBM Avenger, was hit with anti-aircraft fire. Bush's two crewmembers were killed in the attack.

With the aircraft's engine on fire, Bush released his payload against his target, which was a radio tower. He then ejected from his aircraft, parachuted into the ocean, and waited on an inflatable raft for four hours. Bush was eventually rescued by the USS Finback, a lifeguard submarine.

Following Japan's surrender in 1945, Bush was honorably discharged from active duty and went on to attend Yale University.

Bush died at 94, on Friday night. He is survived by his five children, 17 grandchildren, eight great-grandchildren, and two siblings. The White House's flags were lowered to half-staff.

The aircraft carrier USS George H.W. Bush (CVN 77) was christened in honor of Bush in 2006.

“His legacy lives on in those who don the cloth of our great nation and in the mighty warship which bears his name, [CVN 77 George H.W. Bush],” the U.S. Naval Air Forces said in a tweet. “May he Rest In Peace.”