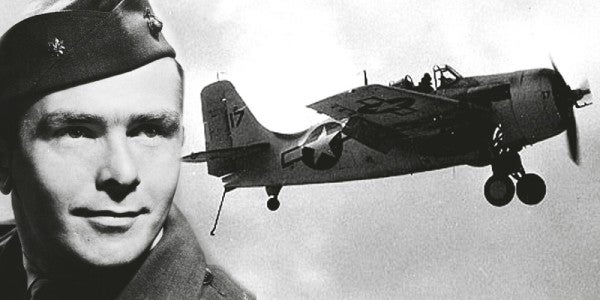 On April 7, 1943, Medal of Honor recipient and Marine fighter ace James E. Swett shot down 7 Japanese bombers, taking out four all on his own after he became separated from his wingmen.

He was also on his first combat patrol.

Born on June 15, 1920 in Seattle, Washington, Swett grew up in San Mateo, California and attended college there in 1939, where learned to fly. After the Dec. 7, 1941 attack on Pearl Harbor, Swett enlisted in the Naval reserves. He began flight training at Naval Air Station Corpus Christi, Texas in 1941 and graduated at the top 10% of his class, according to the Los Angeles Times. Following his graduation from flight training, Swett accepted a commission in the Marine Corps as a second lieutenant.

Related: This Gulf War footage of an F-16 dodging 6 Iraqi missiles is insane»

In December of 1942, Swett shipped out to the Pacific where he served in the skies over Guadalcanal, the scene of brutal jungle warfare between entrenched Japanese forces and beleaguered U.S. Marines.

After returning from a routine patrol off the coast of the island word came down that 150 Japanese fighters were heading toward the Marines’ position from the north.

According to his Medal of Honor citation, Swett took to the air in his Wildcat fighter and “unhesitatingly hurled his 4-plane division into action against a formation of 15 enemy bombers and personally exploded 3 hostile planes in midair with accurate and deadly fire during his dive.”

During the dogfight, Swett became separated from his three fellow pilots, but continued fighting, destroying four more enemy bombers. Though his aircraft’s left wing had been hit and badly damaged during the fighting, Swett engaged an eighth enemy bomber, but its tail gunner opened fire on him, shattering his windshield and damaging his engine.

In total, the battle lasted just 15 minutes, and though Swett had downed a number of enemy aircraft, he wasn’t clear of danger.

“I was cut up around the face by flying glass,” Swett told told The Oregonian, the newspaper in Portland, in 1991, reports the New York Times. “I made a good water landing, but my shoulder straps were too loose and I hit my head on the instrument panel and broke my nose. I struggled to get out of the cockpit as the plane sank, but my parachute straps got caught and dragged me under. I don’t know how deep I was before my life raft inflated and popped me to the surface.”

Fortunately, a Coast Guard vessel was nearby and came to his aid. As the ship approached Swett, one of the crewmen called out:

“Are you an American?”

To which Swett replied, “Damn right I am.”

Afterward he was taken to a nearby harbor and given Scotch and morphine to ease the pain.

Swett retired from the Marines in 1970 as a colonel and on Jan. 24, 2009, he passed away of congestive heart failure at Mercy Medical Center in Redding, California. He was 88.

Watch Swett’s account of that day in the video below.