Pilgrims and natives probably stuffed themselves silly with venison, not turkey. So why do we really eat it on Thanksgiving? 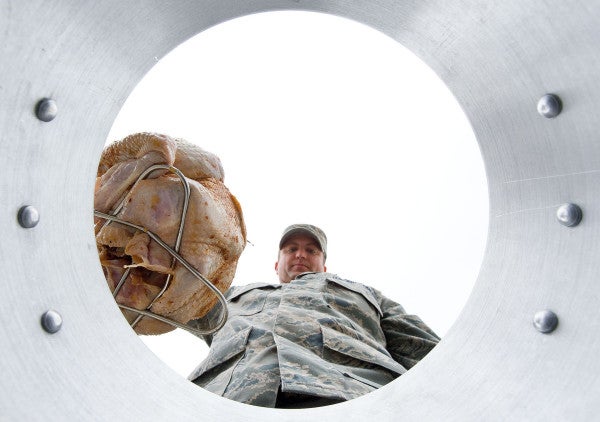 Editor's Note: This article written by Jeff Cattel was originally published on Greatist, a digital publication committed to happy and healthy lifestyle choices.

In between making hand turkeys and pilgrim hats, we learned that the colonists celebrated their bountiful harvest in the New World in 1621 by inviting Native Americans for a feast complete with turkey and all of the usual fixings: stuffing, cranberry sauce, and gravy. But it turns out those were tall tales we learned in elementary school. The pilgrims and natives probably stuffed themselves silly with venison, not turkey. So much for keeping that tradition alive.

There were a few forces at work to make turkey the meat du jour for Thanksgiving. Practically speaking, chicken and cows were more valuable to keep around for their eggs and milk than turkeys, which were farmed and hunted for their meat. Plus, one full-grown turkey was large enough to feed a family.

Logical reasons aside, Sarah Josepha Hale (aka “the godmother of Thanksgiving“) deserves much of the credit for making turkey the centerpiece of every Thanksgiving meal.

Hale, who first gained notoriety as the author of “Mary Had a Little Lamb,” edited “Godey's Lady Book,” a popular colonial era women's magazine, and used her power to get Thanksgiving recognized as a national holiday. Her novel “Northwood” even devoted an entire chapter to the fall holiday. I

n the book, Hale describes a Thanksgiving feast where the roast turkey is the belle of the ball with savory stuffing and gravy. Hale also included recipes for a turkey roast and pumpkin pie in Godey's, spreading these new traditions to the masses, which they quickly gobbled up.

Now when one of your relatives starts talking about the first Thanksgiving during this year's celebrations, you can drop some knowledge and help everyone steer clear of those dicier topics.

This article, “So, Why Do We Eat Turkey on Thanksgiving?” originally appeared on Greatist.