78 years ago, the Allies tried to invade Nazi-occupied Europe — and failed miserably

In the early hours of August 19, 1942, more than 6,000 British, Canadian, and U.S. soldiers and sailors on over 230 ships and landing craft were making their final preparations for Operation Jubilee 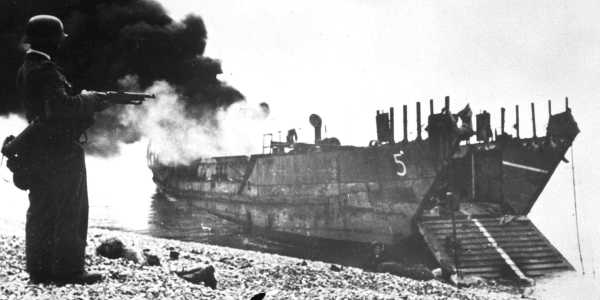 In the early hours of August 19, 1942, more than 6,000 British, Canadian, and U.S. soldiers and sailors on over 230 ships and landing craft were making their final preparations for Operation Jubilee.

Their target was the French port city of Dieppe, just 75 miles from the British coast. They would be the first Western Allied soldiers on continental Europe since the British and French evacuation at Dunkirk two years earlier.

The Allied troops, supported by 58 tanks, eight destroyers, and hundreds of aircraft from the British and Canadian militaries, faced 1,500 German soldiers, as well as 300 Luftwaffe aircraft and a number of small vessels from the Kriegsmarine.

Despite their mismatched numbers, the Allies were about to experience one of their worst disasters of the war.

The raid came at a critical time in the war. Rommel's Afrika Corps had pushed the Allies into defensive positions in Egypt, and the British were still reeling from calamitous defeats against the Japanese in the Southeast Asia.

The Germans had been halted at Moscow, but Leningrad was under brutal siege, Sevastopol had fallen, and the Germans were advancing on Stalingrad.

Stalin was desperate for another front to be opened to relieve some of the pressure. The Allies decided to conduct a small raid on a French port to test the feasibility of a large-scale landing.

The raid would have the bonus of drawing out the Luftwaffe. RAF Fighter Command, inspired by its victory in the Battle of Britain, was eager for a decisive battle it believed could turn the tide of the air war against the Germans.

Almost 5,000 Canadian soldiers, 1,000 British commandos, and 50 US Army Rangers would land at Dieppe. They would take control of the town for a day, destroy coastal batteries and radar stations, and capture German prisoners and documents before returning to England.

If successful, the operation would gather valuable intelligence, test the strength of Hitler's Atlantic Wall and the Wehrmacht's response, and deal a devastating blow to the Luftwaffe.

The raid was doomed from the start. The first landings occurred just after 5:00 a.m. at Yellow and Orange beaches. The unit assigned to Yellow beach ran directly into a convoy of Kriegsmarine torpedo boats, and a number of landing ships were sunk or damaged. Those that made it to shore were repelled by well-prepared German defenders.

It was the only successful part of the raid, but by that point, the Germans were fully alerted.

At Blue beach, Canadian soldiers were left completely exposed when their smoke screen was blown away. Pinned against a seawall, they were mowed down by hidden machine-gun nests and bunkers. Of the 556 troops that landed, 200 were killed and 264 were captured.

The troops landing at Green beach landed at the wrong place. They were funneled over a single bridge and made it farther than any other unit but had to retreat due to overwhelming German firepower.

The landings at Red and White beached were complete disasters. The tanks arrived late so the infantry was forced to attack without them. Like their comrades on Blue beach, they were pinned against a seawall and at the mercy of hidden machine-gun nests and artillery with clear fields of fire.

“The fire was terrible,” David Hart, a communications operator, recalled. “We were sitting ducks”

Twenty-nine tanks were landed, but only 27 made it onto the beach, where the terrain — gravel and pebbles, rather than sand — caused many to get stuck. Fifteen tanks crossed the seawall, but 10 had to return because of German anti-tank defenses, and obstacles that engineers couldn't destroy because they took too many casualties.

“When we reached the beach, all hell broke loose,” said Raymond Gilbert, a tanker. “There was fire and brimstone, the whole bit. It was really quite a shock.”

A retreat was ordered, and by 2:00 p.m. the British ships headed home.

A high price for failure

Allied casualties were staggering. Over 3,600 British and Canadian soldiers, sailors, and airmen were killed, wounded, or captured. Only about 2,200 returned. Six U.S. Army Rangers were killed, with seven more wounded and four captured.

All 29 tanks that landed were either destroyed or captured. The RAF was unable to win its decisive victory, losing over 100 aircraft. The Royal Navy lost over 30 landing craft and one destroyer.

German casualties were minuscule in comparison, just 591 killed and wounded, 48 aircraft lost, and one vessel sunk.

Finally, the Germans were tipped off by French double agents, who informed them that the British were interested in the area.

But Dieppe taught the Allies how to properly open a second front.

It made clear that battleships and bombers needed to bombard enemy positions at a much larger scale, that good intelligence on everything from sand gradient to enemy positions was essential, and that while a port was vital, a direct assault on one would likely prove too costly.

All these lessons were taken into account when, almost two years later, Allied forces successfully invaded Normandy in Operation Overlord.

Vice Adm. Lord Louis Mountbatten, the raid's lead planner and head of Combined Operations, believed it was a necessary failure, saying, “I have no doubt that the Battle of Normandy was won on the beaches of Dieppe. For every man who died in Dieppe, at least 10 more must have been spared in Normandy in 1944.”