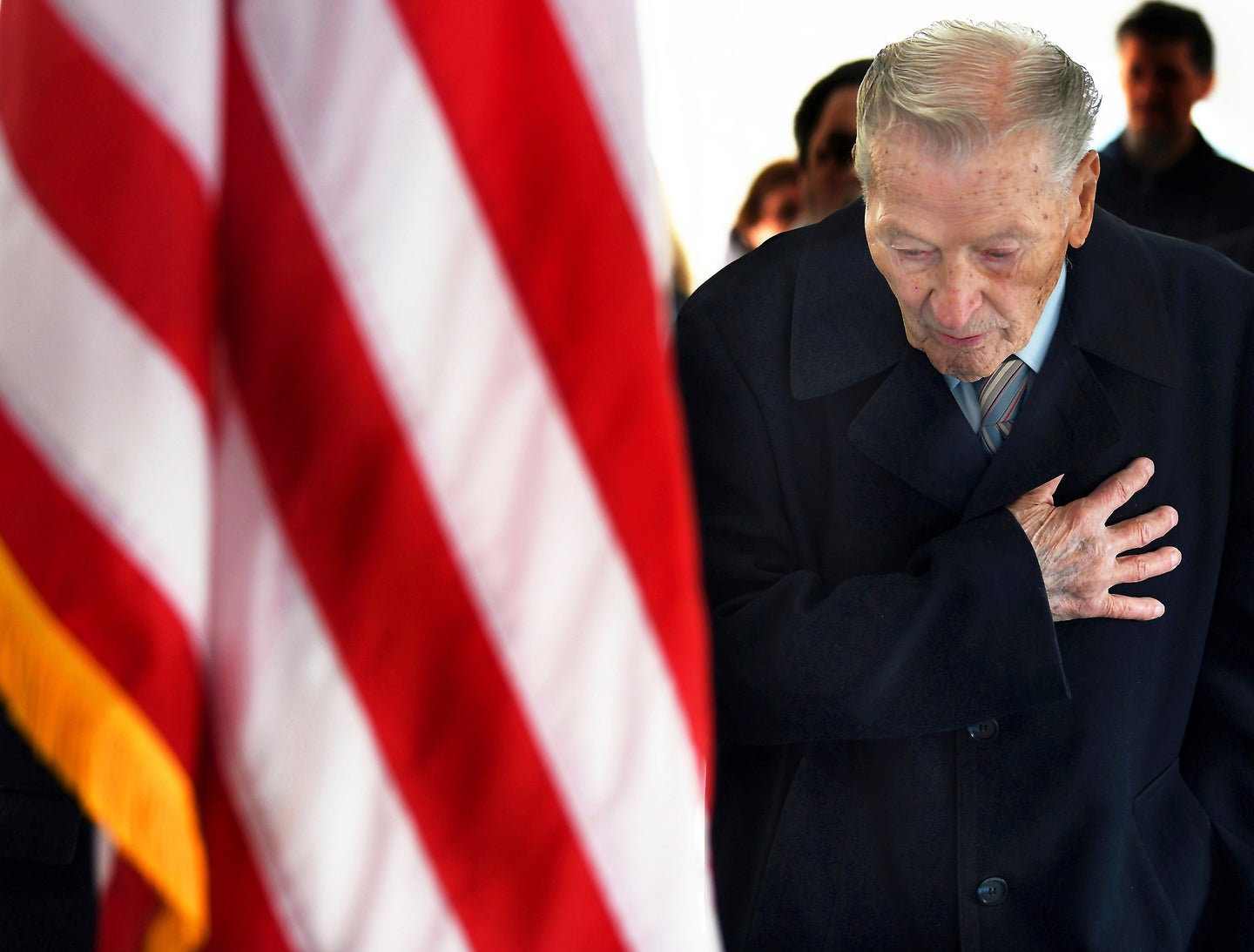 Walter Pasiak was at Pearl Harbor on Dec. 7, 1941, when a surprise Japanese aerial assault there killed more than 2,400 American service members and thrust the United States into World War II.

He was home in his native Scranton less than four years later when word reached the U.S. that Japan had surrendered to Allied Forces following the devastating American atomic bomb attacks on the Japanese cities of Hiroshima and Nagasaki — ending history’s deadliest military conflict.

The initial announcement of Japan’s surrender occurred 75 years ago Saturday — Aug. 15, 1945 Japanese time, which would become known in much of the Allied world as Victory over Japan Day. The official U.S. commemoration of V-J Day is observed Sept. 2, the day in 1945 that Japanese leaders signed the formal surrender aboard the USS Missouri.

From the kitchen of his Scranton home, Pasiak, 98, reflected recently on his decorated service in the war’s Pacific theater, where he fought in the New Guinea campaign and engaged the enemy Japanese in the Philippines. He also recalled the reaction stateside when word arrived that Japan had surrendered.

“There was a lot of celebration going on,” Pasiak said. “The people were glad that it was over. They wanted peace. They wanted normal life.”

Much of Pasiak’s life was shaped by war and military service. Pearl Harbor, the young Army private’s baptism by fire, was just the first chapter in a personal military history defined by decorated combat duty in two wars.

After leaving Hawaii in September 1942, Pasiak was sent to Canton Island, a small atoll in the South Pacific Ocean, then Australia and later New Guinea, where in the spring of 1944 he participated in fighting at Hollandia on the north coast of the island.

While moving inland to secure a Japanese airfield, Pasiak replaced a wounded fellow soldier on a machine gun, he said, describing the ensuing combat.

“I was in a machine-gun section and the other guy was wounded, so I took over the gun,” he said. “I mowed down whatever enemy was coming up the road. … I did away with the enemy that was coming after us, and that was it.”

Pasiak earned a Bronze Star for his service on New Guinea, he said.

A Scranton Tribune article from April 1945 notes Pasiak “was a member of the 24th Division which met extensive opposition” during the invasions of Leyte and Mindoro islands in the Philippines in late 1944.

“To the people of the Philippines: I have returned,” MacArthur proclaimed. “By the grace of Almighty God, our forces stand again on Philippine soil.”

Pasiak was among those forces.

“I was ahead of him,” Pasiak said of MacArthur.

In addition to the Bronze Star, Pasiak’s Pacific service during WWII earned him the Combat Infantryman’s Badge, Good Conduct Medal, Philippine Liberation Ribbon and other awards.

He would go on to receive the Silver Star for gallantry in action during the Korean War, where at Haman on Sept. 3, 1950, he was wounded and partially blinded by an enemy hand grenade but continued to defend his position. Despite an injured arm, Pasiak had a fellow soldier pull the pins from grenades that he lobbed with his good arm toward the enemy, inflicting heavy casualties, according to June 6, 1951 Scranton Times article.

And while the Japanese were for a time his enemy on the battlefield, Pasiak never harbored resentment for the Japanese people. He spent about 15 years of his more than 22-year Army career living in Japan, ending his career as a military advisor in Vietnam.

“I enjoyed living there,” Pasiak said of his post-war service in Japan. “The people were nice to me. And I worked with Japanese (people) that were in the military, in their service.”

In the 75 years since the end of WWII, Japan has become one of America’s closest allies.

“A lot has changed,” Pasiak said. “That’s progress. A lot of progress has been made.”

It was in Kobe, Japan, that Pasiak met his future wife, Hatsuyo Matsudo, who became Patricia Pasiak after their wedding Nov. 1, 1957. The couple was married for 50 years before Patricia Pasiak passed away in 2007.

Shuffling through a collection of laminated newspaper articles and old photographs from his Army days, Pasiak also reflected on the passage of time — noting his status as the last known living local veteran of the Pearl Harbor attack.

The 9/11 Memorial Committee of Lackawanna County spent several years researching and ultimately identified 109 local veterans of the Pearl Harbor attack, who are memorialized on a plaque outside the Lackawanna County Courthouse.

“I’m supposed to be the last survivor from Lackawanna County to survive Pearl Harbor,” Pasiak said, arguing the “man upstairs” took care of him. “You get a funny feeling, but … that’s life. That’s the way my life went.”

“It’s just the reality,” he continued. “It happened. It was one of those things.”

For Lackawanna County Veterans Affairs Director David Eisele, the 75th anniversary of VJ Day is an opportunity to recognize the service and sacrifices of a generation of veterans that, owing to age, is diminishing in numbers.

“It’s really the last of the greatest generation,” said Eisele, a Marine veteran himself. “Seventy-five years is a long, long time.”

Eisele’s grandfather — Marine Pfc. William P. Eisele, a Scranton native — won the Silver Star for gallantry in action on Nov. 25, 1944, while serving aboard the U.S.S. Cabot aircraft carrier off the coast of the Philippine Islands.

The late marine, according to military records, distinguished himself as the aircraft carrier came under attack by Japanese planes while supporting landing operations at Luzon, in the Philippines.

Eisele “shot down quite a few Japanese kamikazes,” pilots who deliberately flew their planes into ships and other targets, his grandson said. He was wounded in the head and stomach by metal fragments from a Japanese kamikaze plane that exploded near the Cabot, but continued to fight, according to the younger Eisele.

Among other services, David Eisele and his team at the county advocate for veterans and work to help them claim benefits they’re owed.

“It’s amazing being in the position I’m in now, fighting for our vets back here, and just kind of trying to carry on his legacy,” Eisele said of his grandfather.

Honoring the legacy of those who served is imperative, especially as the number of living WWII veterans declines, argued Charlie Spano, chairman of the 9/11 Memorial Committee.

“It’s certainly saddening that they will pass from the scene, but the legacy that they have given us in fighting our enemies to preserve our freedom hopefully will last a very long time and contribute to the memory of the them,” Spano said.

Asked about the upcoming 75th anniversary of VJ Day, Pasiak said from experience the end of one war doesn’t mean the end of all wars.

“Wars will continue,” he said. “Somebody’s always going to stir up heck to cause people to go against each other. … There’s no end to it.”

“I just hope that there’s no other world war conflict,” Pasiak continued. “Because it creates a lot of pain for not only the family, but (also) pain and suffering for the individual who has to go through it.”