Wreaths Across America: A Special Honor For 6 Civil War Soldiers

In the back corner of Antietam National Cemetery, a good 25 yards from any other plot, are six graves. They … Continued 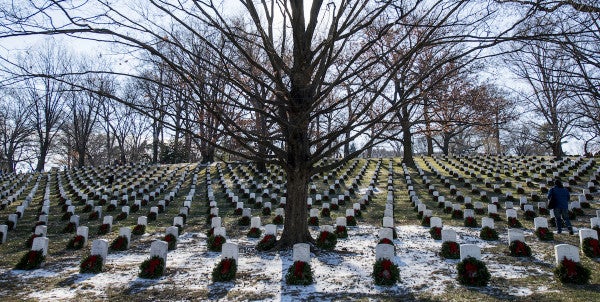 In the back corner of Antietam National Cemetery, a good 25 yards from any other plot, are six graves. They are the final resting places of African-American soldiers who died in the Civil War Battle of Antietam — segregated even in death.

Saturday afternoon, they were first to be honored during the cemetery's Wreaths Across America ceremony.

“Back in the day, everything was segregated,” Keith “Tiny” Nelson said. “As you can see, they’re way back there, versus in the midst of everybody. Now in today’s military, everybody is intertwined together. It doesn’t matter what color, creed or whatever the case may be, that all of us together. We serve one purpose: to serve the United States of America.”

Nelson, who was a military policeman for eight years, served in Operation Desert Storm and in Somalia. He learned about those six men last year.

“Last year, when I laid the wreath for Ron Fisher, I tried to pull his information. There was nothing on Google or any reference to who he was,” Nelson said.

Nelson wanted to see if he could find out whether any of Fisher's family was still living in the area, to send a card and let them know he wasn’t forgotten.

“That’s big respect for us to start the whole ceremony off,” Nelson said.

Antietam was the deadliest battle of the Civil War, taking place in mid-September, 1862 and leaving 23,100 men killed, wounded or listed as missing. Approximately 4,000 men died in the battle, and more would perish from disease soon after.

Marine Corps Master Gunnery Sgt. James Brown, also known as Deuce, is stationed at Quantico, and is president of the Peleliu Chapter of Leatherneck Nation Motorcycle Club. Brown has been in the Marines for 25 years.

“We watched Wreaths Across America at Arlington (National Cemetery) grow to where it is today, and we realized that in our local backyard — we’re out of Williamsport, Md. — Antietam wasn’t even getting recognized at all. So we took it upon ourselves to start it about four years ago,” Brown said.

Since then, the ceremony has grown significantly. The first year, Leatherneck Nation could only place 84 wreaths. The second year they raised enough money to place 400. By the third year. they were up to 700 wreaths.

This year, they were able to place exactly 1,701 wreaths across the cemetery.

“This isn’t your modern-day service,” Brown said. “This was a civil war, Americans against Americans. But it has a significance of where we at today, and how battles are fought today. We learned from the Civil War.

A ceremony was conducted during the first part of the event, with wreaths representing each service.

Gary Gourley Sr. of the West Virginia Wing of the Civil Air Patrol, Martinsburg Squadron, was representing the Air Force. “We’re honoring all the services and all the families who have loved ones here at this cemetery and all across the United States of America,” he said. Gourley served in Korea in 1959 and in 1985-1986 with the U.S. Army.

Boy Scout Troop 265, out of Madonna, Md., presented the colors during the opening ceremony. Marines from the Marine Corps recruiting station in Frederick, Md., and Martinsburg, W. Va., helped lay the wreaths.

“I’m just really proud to be out here with all these people to recognize the service of those who have fallen in the past,” said Maj. Luke Sauber, from the Frederick recruiting station.

“It diversifies the recognition of not just battles that are maybe more current and well-known among the population of today’s military, but also ensures we focus on everything that happened during the Civil War and how that sort of affected the state of our country and the shape of our country today. It’s definitely different, but it’s equally deserving of recognition,” Sauber said.

Of the six men in the corner, Brown said:

“There’s too much hatred in this country. And we need to bring that together. Those gentlemen deserve the same honor and respect as everybody else here. And we want to send that message by honoring them first.”

Brown hopes in coming years to raise enough money to cover all of the more than 4,000 graves at the cemetery with wreaths.