The restored planes parked at Millville Municipal Airport on Thursday brought a rush of memories for the World War II-era... 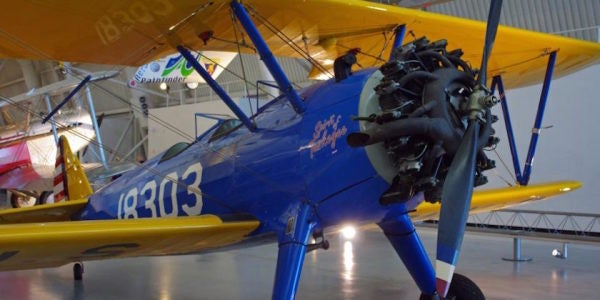 The restored planes parked at Millville Municipal Airport on Thursday brought a rush of memories for the World War II-era veterans who gazed at them.

“Witchcraft,” a B-24J Liberator bomber; “Nine O Nine,” a B-17 Flying Fortress bomber; “Tondelayo,” a B-25 Mitchell bomber; and the P-51 Mustang fighter “Toulouse Nuts” were flying war machines that Albert Teplitsky and the others once knew well from the inside.

Teplitsky, who grew up in West Philadelphia, was drafted in 1943 right out of high school, and served as an aerial engineer and a top-turret gunner.

He now lives at the Delaware Valley Veterans Home in Northeast Philadelphia, and went to Millville on Thursday. He and other veterans were drawn by the old warplanes, flown in as part of the Massachusetts-based Collings Foundation's Wings of Freedom tour.

Some recollections were somber.

Louis Gerlack was last in a B-17 — his specialty — five years ago, when his daughters and grandchildren arranged a flight for him in Reading. It was the first time he had flown in one since 1946.

“If there's one thing I'm thankful for, I was pulled an instructor,” said Gerlack, 94, of Aura, Gloucester County.

Charles Osbourne of Laurel Springs trained at the former Army airfield. “I knew that I would have a chance of maybe getting stationed here, and lo and behold, I did,” said Osbourne, 92, who has a life membership to the air field museum and volunteers there as often as he can. Flying a P-47 fighter, he said, he saw active duty in the North Atlantic in 1944.

When Roland J. “Rocky” Gannon decided to become a pilot, he was still in high school in Ocean City.

Since the Army had eased requirements for pilot training, Gannon — whose nickname comes from James Cagney's character in Angels With Dirty Faces — took a written test in Philadelphia and was one of 36 out of 155 candidates to pass. After training in Miami Beach, he was assigned to a B-17 and was officially a pilot at age 19. He went on to serve in Korea and Vietnam.

At the time, “I had never driven a car in my entire life,” said Gannon, 91, who splits his time between his hometown and South Carolina, where his wife of 65 years is from.

Volunteers with the Collings Foundation such as retired airline pilot Paul Reidy transport the planes between cities.

“My father was in the Army during [World War II],” said Reidy, 67, of Cleveland, a self-described WWII history buff. “He was in the Pacific … It's just part of who I am.”

Earlier in the week, the planes visited Northeast Philadelphia Airport. At 1 p.m. Friday, Wings of Freedom will fly south to Cape May.

Lisa Jester, director of the airfield museum, has met numerous World War II veterans and said, “It's amazing getting to hear their stories.”

The planes at Millville will be open for walk-through tours ($12 adults, $6 children 12 and under) between 9 a.m. and noon Friday. The tour is free for World War II veterans. Proceeds benefit the Collings Foundation, which seeks to preserve American aviation and automobile history.