10 Phrases That Make No Sense Outside Of The Army

The U.S. Army is often viewed as a no-nonsense organization, as it should be, given the awesome responsibility that lies... 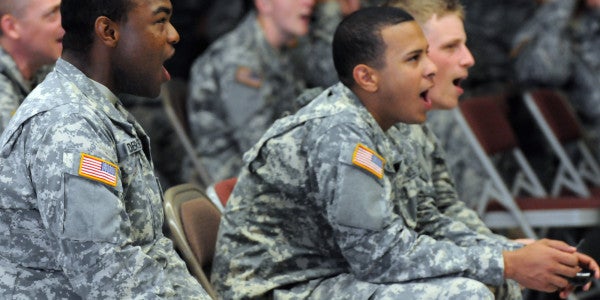 The U.S. Army is often viewed as a no-nonsense organization, as it should be, given the awesome responsibility that lies with its members to protect and defend the people of the United States. As such, military jargon usually reflects this, which words such as, “Roger,” “Affirmative,” and “Execute.” These all conjure up images of hard-bitten soldiers giving orders in combat or communicating vital issues over the radio. And for the most part, this image of a professional organization is exactly correct.

However, as those who have served know, there are a whole multitude of sayings that fit just as well on a kindergarden playground as they do in a military formation, if not better. These sayings are used by privates on up through senior officers and noncommissioned officers. Most of us have gotten so used to them that we don’t blink an eye when we hear them, but to the uninitiated, they sound ludicrous. Here are 10 sayings that make Army soldiers sound like 10-year-olds.

This is usually first heard in basic training, as recruits are ordered to stand in a single file line together, quite close. It derives from the human anatomy and I feel like you get the picture from there.

This one defies logic, especially when heard from senior leaders. It refers to snacks, candy, or other small comforts that soldiers bring with them during field training. As in, “Men, we’ve got a 10-day field training exercise coming up, so make sure you bring all your lickies and chewies.”

There has to be some correlation between Army and Cockney slang, since so many phrases in both cultures are built around rhymes. This phrase refers to a group of soldiers standing around doing nothing particularly useful. They may not even be smoking and/or joking, but the phrase is still used: “We’ve got a busy day, so make sure the troops aren’t standing around smoking and joking when the commander walks through.”

The infantry branch is often maligned for a perceived lack of intelligence among its members by those of other branches. While this has not been proven, they certainly don’t help their case by referring to themselves as “11 Bang Bangs.” This is derived from their alpha-numeric military occupational specialty code of 11B: “Yeah, I was in the Army, I was an 11 Bang-Bang.”

Most people would be content with calling a firearm by what it is: rifle, shotgun, machine gun, or pistol. But no, in the Army, we have to give special names that sound like they come from a 4-year-old. Ergo, the boomstick, most usually a name for a rifle or shotgun: “We’ve got a door to breach, grab your boomstick and come with me.”

I have actually caught myself saying this and then realizing I sounded absolutely silly. It refers to one or two soldiers, usually in a negative capacity: “We’ve got medical appointments today, and I want the whole platoon there on time, not coming in onesie twosie.”

Far more descriptive than I care to detail. It refers to soldiers’ love/hate relationship with the Army. When the Army does something that they do not care for or that negatively impacts them, soldiers blame the Green Weenie: “I just got transferred to Fort Sill; man, got screwed by the Green Weenie again.”

This is the opposite of onesie twosie, and equally laughable. It means, well, everyone. For example: “We’re having mandatory drug testing today, and that means lottie, dottie, and everybody will be there.”

Even the most professional organization is going to have some slow learners. This saying describes those soldiers who are slow on the uptake or just cannot function in their job: “I saw Carl over in 2nd Platoon, and man, is that guy lost in the sauce.”

This is my least favorite term in the Army, for the simple reason that a whole bunch of grown men and women making this noise sounds neither intimidating or professional. It can be used for anything: showing motivation, demonstrating that you understand, or most commonly, that you have no idea what was just said, but that you want to look like you did: “So what we’re going to do is leverage the staff to bring about a synergistic environment in order to create a product that is perfectly fungible.” “Hooah.”