The Defense Video Imagery Distribution System, or DVIDS to defense and military journalists, is overflowing with pictures, videos, and news … Continued 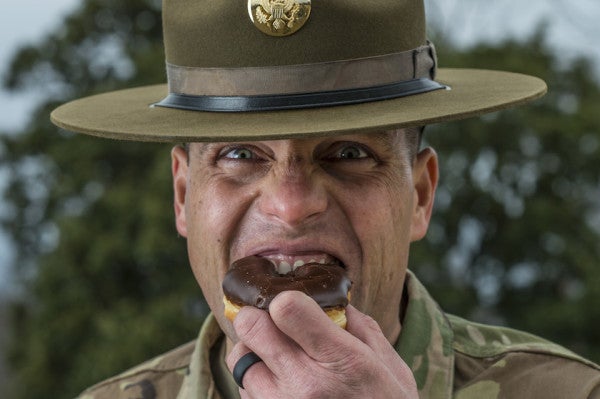 The Defense Video Imagery Distribution System, or DVIDS to defense and military journalists, is overflowing with pictures, videos, and news briefings, and serves as an indispensable archive for all the Pentagon's media going back decades.

But every so often, you come across a photo that just makes you shake your head and go, “wait, what the fuck?”

After an exhaustive search, we compiled some of our favorites, and needless to say, you really need context to understand what these images have to do with the U.S. military.

What a waste of cheerios.

This guy definitely got lost on his way to rob a bank.

Is this what happens when you drop acid and watch Smokey Bear?

Sparky the fire dog and Earl the safety squirrel, prepare to race during a children’s bicycle safety event at the Balfour Beatty Community Center, Oct. 17, 2015.

The only way to take down a zombie is to stab it in the brain. But try to do it with a smile.

Is this what happens when you try to make a garden salad in theater?

Sailors attached to the U.S. 7th Fleet flagship USS Blue Ridge (LCC 19), pose for a photo on the main deck during a steal beach picnic and family day cruise.

Do I really want to know what you’re doing to that orange?

Drop and give him a dozen doughnuts.

Sgt. 1st Class Joshua Moeller, U.S. Army Reserve drill instructor and the 2016 U.S. Army Noncommissioned Officer of the Year, jokes around by biting into a donut during a marketing photo shoot organized by the Office of the Chief of Army Reserve at Fort Belvoir, Virginia, Feb. 14, to promote the U.S. Army Reserve.

I didn’t know they let bubble boys join the military. Oh wait, this is the Air Force.

A group of Airmen collide during the start of a bubble soccer game April 22, 2016, during a tournament inside the Freedom Hall Fitness Center on F.E. Warren Air Force Base, Wyo.

HOW MANY WALDOS ARE IN THE MILITARY?

Competitors goof around before the start of the 17th Annual Combat Logistic Battalion-3's Swamp Romp aboard Marine Corps Base Hawaii, Feb. 26, 2011.