4 Types Of Delivery Trucks The Army Needs To Consider

The Army is field testing a concept food truck to deliver breakfast, lunch, and dinner to troops in training and... 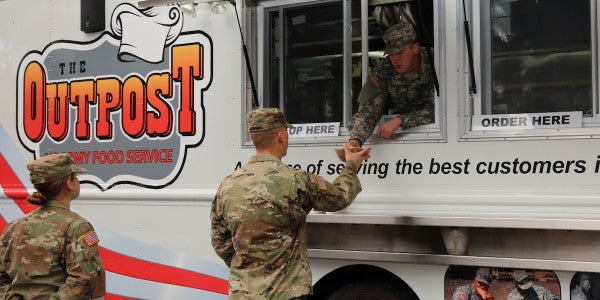 The Army is field testing a concept food truck to deliver breakfast, lunch, and dinner to troops in training and field environments, Army Times reported March 12. The idea is to get soldiers fed without having to break and head back to the dining facility. Of course, back in the day, we just gave everyone an MRE and told you to suck it up. I guess being a kinder and gentler Army means considering the troops’ gastrointestinal tracts and the field latrines too.

Every soldier who has spent time in the field knows that it’s not just food that you need out there. Sure, the logistics officer is making sure you have fuel and ammo, but if we’re going to start doing deliveries, we should take care of the whole soldier, not just the field soldier.

Here are four other types of delivery trucks the Army should consider.

There’s not going to be a one-size-fits-all delivery truck. Each branch of service has different needs and requirements to get the job done. For the Marines, I suggest rather than a food truck, we instead send a five-ton with “FOOD TRUCK” scrawled on the side in chalk. In the back are rat-fucked MREs with all the good stuff taken out already, and a water buffalo that has a hint of a bleach taste to it. The Navy will be the ones driving the truck, dropping everything off, and then hitting the closest steakhouse.

Conversely, the Air Force will have fresh tea and crullers delivered every day.

The Army will have the largest truck, of course. It will be filled with bloat and the E-4s running it will never be around, and will eventually replaced with contractors making $80,000 a year. We’ll see it only one time, and from then on it will always be in the repair shop.

Keeping it branch-specific means everyone will feel the government cares about their specific needs. It will also keep the Marines in check. We can’t let them have good things or they get complacent.

The needs of the infantry are not the same as the needs of those in support roles. Food will take care of the body, but the combat arms needs something for their soul as well. Because of this, combat troops will get a busted-up van that comes out to your field op to deliver logs of dip, beef jerky, energy drinks, and pornography. You’ll then find it never has your brand of anything (Copenhagen, Jack Link’s, Monster white cans) and you’ll have to take what you can get.

If you wanted life to be better, you shouldn’t have joined the infantry, buddy. At least this will help improve the morale of the fighting man, while still giving him his right to complain about how everything sucks.

Imagine a monster truck blasting Led Zeppelin and covered with sponsorship stickers from 5.11 and Black Rifle Coffee Company. Out pops two dudes who look like they spend their days mainlining creatine at the gym. The hatch opens up, and rotating displays of overpriced Oakley's and survival knives hit the ground.

You know that section of the PX I’m talking about, tucked in the back near the actual military gear you only have to buy because your roommate stole your wet weather bag. The combat and survival gear no one needs, but all privates inevitably buy, dreaming about the day they need a flint fire starter/knife/survival whistle while doing maneuvers in the wildlands of Georgia.

This doesn't help anyone other than the brands trying to make a living off privates with too much excess cash, but at least it’s an economic stimulus to graphic designers who specialize in designing flaming skulls.

I know what you’re thinking, shouldn’t solders be carrying their own water in the field environment? This truck isn’t here to fill your camel back, this is the Sunday morning mobile rehydration vehicle. Inside you’ll find medics who didn’t spend the night before blasted on bottom-shelf whiskey and are ready to kindly administer IV fluids to the less fortunate.

We’ll call it the Church since everyone will be there Sunday morning. It will have comfortable beds, an IV bag for everyone who needs it, greasy breakfast sandwiches and Bloody Marys on tap. This will help improve the morale of everyone who wakes up in the morning feeling like there is a tiny drill sergeant in their head trying to escape via shouting.

We’re getting a $54 billion boost to the defense budget, how about we make one less F-35 and hook the troops up?