The Marine Corps Forces Special Operations Command, or MARSOC, just unveiled a new badge to be worn by its elite... 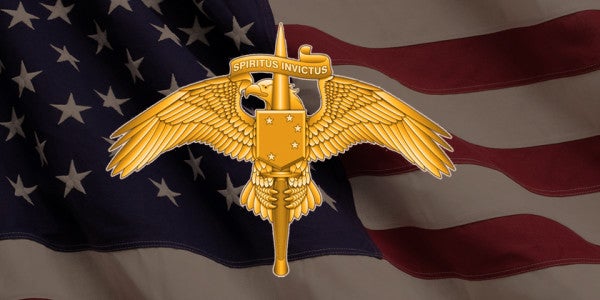 The Marine Corps Forces Special Operations Command, or MARSOC, just unveiled a new badge to be worn by its elite operators, and some people aren’t too thrilled about it. But, really, who can blame them?

Take a look at this thing: An eagle clutching a knife. Cool! It’s like a tattoo you get when you just get out of basic training, and you’re drunk on cheap vodka, and you don’t have any ideas for tattoos. Full disclosure: I have that tattoo. Also, what is the eagle actually doing with that disproportionately huge knife curiously situated between its feathered legs?

Get your mind out of the gutter. The point is, you’d think that there’s at least one person in the MARSOC graphic design department with a bigger imagination than what we see on display here (no pun intended); though, apparently, a lot of thought went into creating this generic symbol of American military might.

“The center of the 2-inch x 2.75-inch insignia consists of the bald eagle, representing the United States, with outstretched wings to symbolize the global reach of the U.S. Marine Corps,” MARSOC commander Maj. Gen. Carl E. Mundy III stated in a press release. “A dagger clutched by the eagle reflects the emblem of Marine Raider Battalions and the Marine Special Operations School. The Southern Cross constellation superimposed on the dagger represents the historic achievements of the Marines serving during the Pacific campaign of WWII, specifically those actions on Guadalcanal.”

All of that makes good, plain sense. But, really, the Marine Corps’ most elite combat unit deserves something better, something that points to the complex and supremely dangerous nature of its mission, something that, when worn on the dress uniform, people will point at and say, “That guy is an unstoppable terrorist killing machine with balls of stainless steel.” In other words, we need a MARSOC insignia that screams tip of the spear, not simply hints at it with thinly disguised phallic symbolism.

Well, in case the Corps is still shopping around for alternatives, we’ve come up with a few unsolicited ideas of our own, which we’ve sent to the MARSOC public affairs office for consideration. (This article will be updated with their response if and when it is received.) Here they are.

So this is obvious enough. Take the Raider insignia, make it gold, throw the MARSOC motto and a pin on it, and voila! You’ve got a badge that looks cool and highlights the Corps’ proud World War II history without looking like the SEAL trident’s sissy little brother.

One would be hard-pressed to find a better symbol of all-American badassery than John Rambo, so why not make him the MARSOC badge? Yes, I know, Rambo was a Green Beret, but, hey, the Army isn’t using him!

The devil dog is as iconic of the Corps as the leather recliner is of the Air Force, and there’s no point in trying to reinvent the wheel here. Of course, we’ll need to jazz it up a bit to reflect MARSOC’s ability to kill anything and everything in its path, which is easy enough: laser beam eyes!

An eagle clutching a giant dagger isn’t scary. What is he going to do, drop it on your head? But give an enormous dagger to a MARSOC operator and he’s going to march right through gates of hell and kill Osama bin Laden all over again. Also, anatomically speaking, it makes a lot more sense.

Why MARSOC didn’t just go with a gold version of Terminal Lance’s “moto tattoo” is beyond us. It’s got everything: a fire-breathing eagle, a machine gun-toting grim reaper, a skull, and little Baby Jesus. What else do you need?