For anyone who has worn the uniform, there’s a fundamental truth of service that never makes it into the commercials... 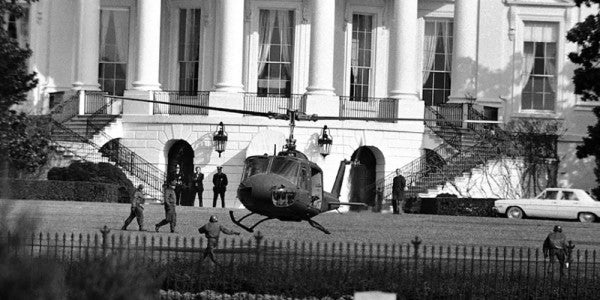 For anyone who has worn the uniform, there’s a fundamental truth of service that never makes it into the commercials and recruiting ads: It can be boring as all hell.

Sometimes, either due to good intentions gone awry, frustration, or someone drank too much, service members and veterans make some bad decisions. In many cases, this ends with a hangover or a moment of public embarrassment. Occasionally, these choices lead to sprains and maybe a broken bone or two, like when a Marine decided to jump three stories onto a stack of mattresses.

But sometimes, someone does something so dumb and outrageous that it makes the news. Here are five of those moments.

The soldier who stole a puppy to save it from being neutered.

In early June 2015, U.S. Army Sgt. Aaron Duvel of the Missouri National Guard was caught on video stealing a mixed-breed puppy from the Humane Society of Southwest Missouri with his fiancée, according to ABC affiliate KSPR News.

Having heard from a veterinary hospital that it is unhealthy for dogs to be neutered within the first year of their lives, the couple wanted to make sure this puppy was protected from such an operation. After being denied the opportunity to adopt the puppy, the couple thought the best course of action was to take him anyway.

“Really, the criminal part never really came in mind at all to be honest,” Duvel told KSPR with a seemingly amused grin. “It’d gotten pretty serious so it was pretty much past the point of dropping off some money and saying I’m sorry.”

The drunk soldier who defected to North Korea.

According to Business Insider, Jenkins decided to get drunk and then defect because his unit was being ordered to lead increasingly provocative patrols, and he heard they might be heading to Vietnam. His time in North Korea involved 24-hour surveillance, making it more akin to imprisonment than defection.

Instead of continued service in the military fighting communism, Jenkins spent the next 40 years learning the works of Kim Il-Sung by heart, teaching English to presumed spies in training, and acting in movies as the villain. Needless to say, Jenkins quickly regretted his decision.

In a 2005 interview on “60 Minutes,” Jenkins described being constantly watched and told when to eat, sleep, and even when to have sex. According to Jenkins, the North Korean government eventually brought him an abducted a woman from Japan to teach North Korean spies Japanese, and before long, they were married. Not exactly the most beautiful love story, but it did yield the pair two daughters.

Upon being freed in 2004, Jenkins reported for duty in Japan and was swiftly court-martialed, receiving a significantly reduced sentence for the almost four decades of internment in North Korea. He now sells crackers at a historical museum in Japan.

The soldier who landed helicopter on the White House lawn.

In the early hours of Feb. 17, 1974, U.S. Army Pfc. Robert Preston buzzed commuters on the Baltimore-Washington Parkway in a stolen Huey, and then approached the White House, landing briefly before Maryland State Police arrived in two choppers of their own.

Preston led them on an aerial chase, leading one officer to say afterward that he was “one hell of a pilot.” He proceeded to hover near the Washington Monument, nearly colliding with it, before returning to the White House, where he hovered 100 meters away on the South Lawn.

After taking shotgun and submachine gun fire, Preston put the Huey down and attempted to escape on foot, but was tackled and arrested. President Richard Nixon, who was in the middle of the Watergate scandal, was not at the White House during all of this.

Even though he led two police choppers, and scores of other law enforcement personnel on a high speed chase, broke a host of laws and military regulations, Preston only served six months in the military stockade, before receiving a general discharge.

The drunk Marine who set off the fire suppression system in a hangar.

At about 1:45 a.m on May 23, 2015, a Marine drunkenly triggered the foam-based fire suppression system at an Air Force hangar on Kadena Air Base in Okinawa. Marine Corps Times reported that it’s unclear how the Marine entered the hangar, what specific punishment he may have faced after his arrest, and just what his level of intoxication was.

The British soldier who stole an armored vehicle, crashed it, stole another.

In February 2009, an 18-year-old British soldier went for a drunken joy ride, stealing not one, but two armored vehicles before running a military police patrol off the road, reported Daily Mail.

German authorities said that the unnamed soldier was “highly intoxicated” when he stole an armored command car, swerved through the entrance at Hoehne Barracks in Northwest Germany, before careening off the road minutes later, reports the Daily Mail.

Astonishingly, the soldier crept back on base, which was now on high alert, and stole another armored vehicle — a tracked ambulance this time — and sped off again. A military police patrol tried to stop him, but was forced off the road before the driver crashed the second vehicle into a tree.

We all got the giggles when we read this,” British Army spokesperson Helga Heine told The Local in 2009. “But stealing a vehicle is a serious offense and it will be dealt with accordingly.”

A German police officer told Daily Mail: “Apparently he muttered something about wanting to see green fields and trees.”