5 Turkey Fails That Will Ruin Your Thanksgiving

Thanksgiving is nearly upon us, and that means a crap ton of turkey. Ahh yes, these ugly, stupid, and delicious... 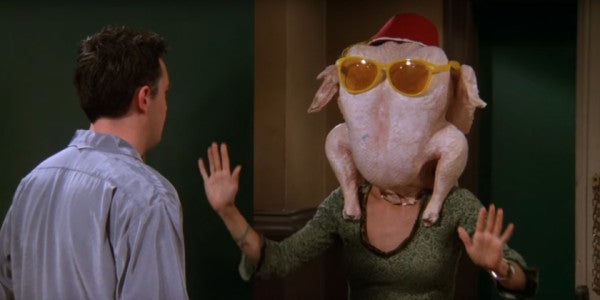 Thanksgiving is nearly upon us, and that means a crap ton of turkey. Ahh yes, these ugly, stupid, and delicious animals will die in droves, baste in their own juices, and be devoured by countless Americans come Nov. 24. Unless somebody messes up in the kitchen. No, let’s reword that. Somebody will most definitely screw up while making Thanksgiving dinner, but if we’re lucky, someone else will be on hand to record it.

A lot can go wrong on Thanksgiving, which is why there’s YouTube. Here are just a few possible pitfalls awaiting would-be cooks hoping to impress a housefull of friends, family, and guests hungry for birdflesh.

Someone could drop the bird at the last minute, like this lady.

Then there’s the deep fry crowd, and while a deep fried turkey sounds amazing, stuffing a 10-plus pound bird into too small of a pot, with too much oil, on top of a grill, isn’t going to end well.

But that doesn’t mean cooking it in an oven always works out, either.

Let’s not forget the importance of setting a timer, because there’s overcooked, then then there’s this:

Finally, everyone loves pranks (well, pranksters at least), and what better time than during the holidays? The best thing about getting a bunch of family members and in-laws together is the opportunity to screw with them, but there is such a thing as pulling too good of a prank.

Like this one where nobody told the woman basting the bird that it had a cornish game hen stuffed inside. She thinks they’re eating a pregnant turkey (let’s ignore the fact that the smaller bird is defeathered and has no head.)