It's that time of year again when we celebrate the end of Fall by putting on elaborate animal costumes and... 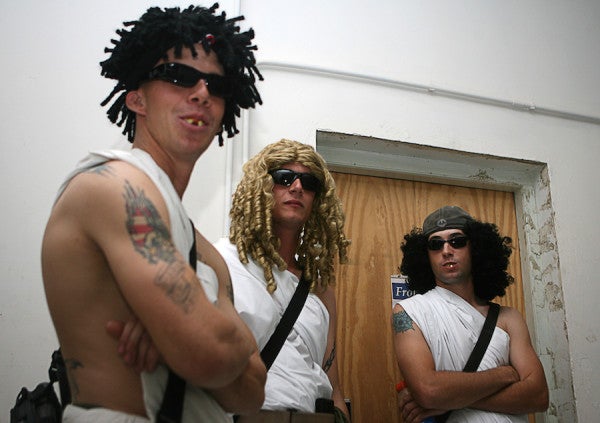 It's that time of year again when we celebrate the end of Fall by putting on elaborate animal costumes and the like and go house to house exchanging merry tunes for food and treats. But for those of you out there who don't celebrate the traditional Gaelic pagan holiday of Samhain on Oct. 31, it will also be Halloween — the annual celebration of our two greatest national pastimes: capitalism (spending too much money on an elaborate and useless costume that will end up covered in liquor and other stains) and obesity (candy and beer all around!).

Various military costumes are always among the more popular ones, but most of them are getting a little tired. Being the swell guy I am, I'm going to go over some of the more overused variants that should be ditched and, since I'm an even sweller guy, give you some fantastic alternatives sure to make you the belle of whatever costume ball you'll be thrown out of in disgrace this weekend.

Of all the terrible things that came out of the popularity of the film “300,” the massive influx of dudes (and occasionally women) in greaves, plastic helmets, and leather straps stumbling around bars knocking over drinks with their floppy shield and easily broken spear every year is one of the worst.

Alternative: Celt. The Romans never conquered most of them and their culture wasn't entirely based on slaves, so way more respectable. Also, they fought wearing nothing but blue paint, so that should turn some heads at the party this year.

There is no way to put on a pilot costume and not look like a crappy “Top Gun” knock-off. And if you're actually going as a character from “Top Gun,” then everybody hates you. Seriously. Everybody.

Alternative: This close to Halloween, I assume you already bought the flight suit. And if people are already going to ridicule you, better to have them do it on purpose. Turn it into a bad pun costume. Wear it with a headlamp and go as a “pilot light.” Or put a toga over it and be “Pontius Pilot.” Stupid? Yes. But that's what you get for buying a damn flight suit.

Every single person you meet will ask you, either seriously or sarcastically, if you're supposed to be Popeye or Gilligan. It will drive you insane rather quickly.

Alternative: Just go as Popeye or Gilligan and save some time.

As if there aren't enough people wandering around every year in tattered clothes and smeared with fake blood trying to grasp at the last fringes of the overdone obsession with zombies, this particular costume has the added problem of being seen as offensive by some. So way to bat a thousand if this was your plan.

Alternative: Go as the zombie of one of my favorite historical military figures, Union Army Gen. John Sedgwick. It avoids the pitfalls of repetitiveness and offensiveness because it's very specific, he was killed over a 150 years ago, and the circumstances of his death were hilarious (At the Battle of Spotsylvania Courthouse on May 9, 1864, his men were ducking under Confederate gunfire, which led the general to remark “Why are you dodging like this? They couldn't hit an elephant at this distance!” He lasted a few more seconds.)

Some camouflage with a little extra leg or cleavage. Maybe a helmet or a provocatively held toy rifle. Ho-hum, seen it.

You know exactly who I'm talking about. The guy/gal in the costume contest who insists the emcee present him/her as, not a soldier, but an “operator.” Any costume that includes a pair of Oakley sunglasses worth more than three other people's costumes combined, an energy drink-stained shemagh with the price tag still on it, and a lite beer in a quick-release holster. Save your desire to feel hardcore for the nights you share with your XBox and your regret, nobody wants to go to a party with someone in a plate carrier.

Alternative: Go as one of the unsung heroes of the military machine. Wear a plain, crisp uniform and a look of utter disdain and be an IPAC clerk. Or dress in business casual and hand out pamphlets on strengthening your marriage while you smile way too hard like any good family readiness officer. Or go as a SACO, trudging around the bar trying to get everybody to pee in a cup in front of you. Or just stay the hell home with your copy of “Black Ops 2” and let the rest of us ogle the Celts in peace.

No need to thank me, I'll just be happy knowing there are that many people wearing costumes that won't induce a pained sigh from your fellow trick-or-treaters/drunks. But if you do want to show your appreciation, I'll be the guy dressed as the ghost of another of my favorite military historical figures: Gen. Philip Sheridan (at the Battle of Chattanooga on Nov. 25, 1853, he raised his flask towards some Confederate officers on a ridge above him and shouted “Here's at you!” They responded by firing artillery at him and spilling some of his booze. “That's damn ungenerous!” Sheridan declared, “I shall take those guns for that!” He immediately ordered a charge and, true to his drunken word, was sitting astride one of the Confederate guns a short time later, whooping and waving his hat in the air).

So buy me a beer and, when somebody spills it, we can attack them, sit on them, and wave our hats. Unless you're dressed as a Celt. Then you'll have to wave something else.