Veterans are mostly proud of their service. And rightfully so, it’s no small thing to take the leap into the … Continued 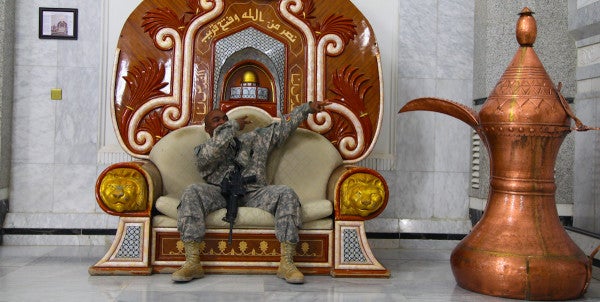 Veterans are mostly proud of their service. And rightfully so, it’s no small thing to take the leap into the military and all that it entails. But there are some veterans who, well, they’re like that one 50-year-old dude for whom high school was the highlight of his entire life and who references every situation back to “the good old days.” Like that, but, you know, with guns.

Because of this, we all know those service members and veterans who so prominently display photos of themselves on social media in uniform that all we can muster is a heavy eye roll or an “unfollow.” We get it, you served, thanks for the daily reminder. Not sure how Arbor Day is all about veterans, but somehow you made it out to be. You know, that kind of veteran. To some extent, we're all guilty of this in some capacity. Because out of the millions of photos out there, they can all be boiled down to fall into about seven distinct categories of obnoxiousness.

This photo gets whipped out whenever a vet feels nostalgic, and it’s often accompanied by some remark such as, “It was harder at back in than it is for these soft kids today who get coddled!” It’s also a popular photo for those individuals for whom basic training was the only point in their career, because they didn’t really make it any further. The poster bears some risk in doing this because if they’re discovered they are apt to be covered in a deluge of ridicule.

This one is firmly the property of the younger generation these days. And with all mirror selfies, we have to say: Please police up your backgrounds before you post these things. We can clearly see the pile of Bud cans behind you and — worse — your messy pile of moto t-shirts. We get it, you love your job, but we don’t need a daily reminder of what you in uniform and your shower curtain look like. Give it a few years until you are managing troops like yourself and you’ll be singing a different tune.

3. The ‘Look How Responsible I Am’ One

Clad in dress uniform or serviceable camo, maybe even cracking a clean-cut smile, we can see that you’re a responsible service member — probably an officer. Your feed is full of positive stories about the military and your family. Frankly, boring, but we’re glad you’re around to provide order and point out uniform violations online.

This one is a bit more nuanced, because it can be divided into two categories: the DGAF (don’t give a fuck) military and the DGAF ETS/EAS’d. The DGAF military is usually a bunch of grubby troops out in the field with all manner of uniform violations, exercising their ability to cram a vast quantity of tobacco products into one shot. These photos often include some kind of animal or mascot. Apparently there are bonus points if you incorporate one of many stages of inebriation and the vagaries of uniform adjustment that come with it. The DGAF ETS/EAS’d veteran demonstrates how quickly one can lose one’s military fitness after leaving the service while still letting everyone know that you served. It takes skill, really.

This variant shows the service member or veteran in some sort of a shooting pose: staring grimly down the barrel of a rifle, putting lead downrange with a machine gun, or dramatically going toe-to-toe with a 25-meter target with a 9mm handgun. Added bonus points if there’s a blank firing adapter attached so that we know that you’re a real hardcore killer. And for those of you who tried to pose to make it look like you’re engaged in a brutal firefight with Tommy Talib, it begs the question: Who do you expect us to believe it was that took the picture? Now go think about what you’ve done.

6. The Band of Brothers/Sisters Shot

One of the most common, this one shows the veteran posed with a group of their buddies in front of their vehicle/track/combat outpost/helo/vessel/aircraft. Usually there’s an American flag somewhere in the picture. It’s often a phone photo of a hardcopy photo to get that vintage feel. There’s bound to be a mix of those who really want to take this seriously and are at parade rest or at responsible low ready, and those who really don’t care and who are throwing up all manner of obscene gestures.

And the most common of all: The guy standing in front of a desolate backdrop, or one of Saddam’s many palaces, holding a weapon. By the obligatory law of veteran social media, the weapon has to be held at a 45-degree angle, either at the low ready or in the air Rambo-style. This one lets everyone know that you’re a hardcore combat killer since you also seem to be wearing half of Ranger Joe’s tacticool product line. The zip ties are a nice touch, what with all the detainees that your convoy protection team will be processing. Again, bonus points for a blank firing adapter. Same for a belt of linked ammo draped artfully across your shoulders, because as we all know, ammunition always feeds better if it's covered in dirt.