All military veterans and active duty personnel know at least one story about a deployed service member whose loved one... 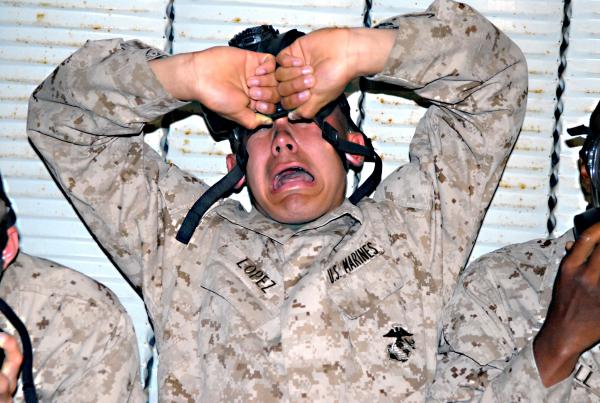 All military veterans and active duty personnel know at least one story about a deployed service member whose loved one betrayed him or her in some brutal, heartbreaking fashion. (Think of that scene in “Jarhead” when the Marine receives a video of his wife getting screwed by the next-door neighbor.) We asked some of the Task & Purpose contributors to share their own stories from the field. In hindsight, some of these stories are hilarious, but man, what is wrong with people?

Check out these stories, and leave your own in the comments.

So a friend of mine (not a euphemism for me) was on his second deployment as a married man. This one was long for the Marine Corps (12 months versus the usual seven) and toward the end of his tour, he had a harder and harder time getting a hold of his wife. The last three weeks they were out of touch altogether. She was a notoriously bad communicator so he wasn't too suspicious about the whole thing, but when he returned she wasn't there to meet him. He drove to his home and the entire thing was empty, completed ransacked of all valuable items. After a long night sleeping on the floor, he went to the bank. He asked the teller for his account balance, and stood there with his fingers crossed. The response was the worst thing you could possibly imagine: “What account?”

When I was deployed with the Air Force, there was a NCO and a senior NCO from different sections of the same organization who were notoriously cruel to us young airmen. They yelled, they name-called, and they had their pet favorites. They didn’t know each other much from their stateside assignments, but started getting pretty close over their shared frustration with clumsy airmen. At some point, they started disappearing together. Then they would take the unit vehicle and disappear for hours at a time. Once they got back to their home station and went through medical, turns out she got pregnant! They both lost a stripe, and one got divorced. Karma for the underdogs! —Chris Wicker

Related: 7 types of people you date while in uniform »

I’m working in Iraq for the State Department and about to come home for my second leave block. A week prior to returning, I find out that my girlfriend had kissed someone else in between my last leave block and now. I ask her if she still wants me to come back or we just go our separate ways. She tearfully says she wants me to come back and we’ll sort it out. On the way back, I’m delayed over a day in Kuwait City and end up arriving the morning before we are set to drive 16 hours from D.C. to southern Florida. After a couple days of getting a bit of a lukewarm reception from her, I finally ask what’s wrong. She proceeds to tell me that she can’t do the long distance thing anymore and isn’t sure she is ready to settle down. I think to myself, “We drove 16 hours to Florida, are not even four days into my vacation, and you think now is the best time to tell me this?”

To make things worse, we still have four days left and I’m not about to have a young woman drive all the way back up the eastern seaboard by herself so I have to grit it out. Even after we get back, I have no place to stay so I crash at her place until I fly back to Iraq. In the process of staying with her, I come to find out that she had been seeing the guy she kissed for a couple months and to this day, they are still together. It took me about a year to get all my stuff back although I have happily moved on. I do wonder, however, is this is cosmic payback for breaking up with a girl three weeks before I was coming home on deployment leave after being gone for nine months.” —Kyle Dykstra

I deployed with a guy whose break-up with his wife was like a slow-motion car wreck, compounded by his total naivety and denial. First, she made “friends” with this Marine on base, then she gave away her husband's dog, then she withdrew $5,000 from their bank account. All the while he refused to see what was happening. Only after his wife's new Marine friend was arrested (for a sexual assault) did she call her husband and tell him. While he was on the phone with her in the middle of the shop with everyone there. All we heard was his end and it was devastating. “Did you sleep with him?” he asked. “Do you love him?”

He got off the phone and tries to leave the building, but collapses in the hallway just outside the doorway and screamed, “SHE FUCKED HIM!!!” We literally had to drag him back in the office before the majors and colonels who worked in our building came out to investigate, which they inevitably did. It was maybe the most ridiculous and dramatic thing I've ever seen, played out over three or four months in the deserts of Afghanistan. Really easy to predict, really hard to watch.

When I was a commander, I had a soldier who was having a rough time with his wife. He boarded the plane with us for Kuwait, and as soon as he landed to begin his one-year deployment, his wife sends him the “Dear John” email. He hadn't even gotten to Iraq yet.

6. The ‘You Should Be Happy For Me’ Call

I spent almost an entire summer at sea on my ship completing pre-deployment work-up training. After the third and final certification exercise, I called my boyfriend, Tim, a Marine pilot, delighted to be on dry land and hoping to meet up before I finally left for block leave and deployment. After reaching voicemail, Tim called me back while I was enjoying a margarita with one of my friends at a local Mexican restaurant. When I told him that yes, I was with company, he said, “Oh good, you're with someone who can take care of you after I tell you this news. I met a girl a week ago and I think she's the one. And besides, you're going to be gone a lot. I know this is probably pretty callous, but I hope you'll be happy for me. I'm just telling you that it's possible to find the one, and when you know, you know, because I did.” After a long pause, and calling him out on the manner in which he was breaking up with me after a year, he replied, “Well, you know I was never really going to 'come around' to you. I am so annoyed that you thought I would. By the nature of calling this a breakup, we've failed at what this should have been. I'll always value you as a friend.” As it turned out, Tim did me a favor: I met my partner almost exactly six months later. —Anna Granville

7. The One Who Banged Your Brother

Some of my soldiers overheard one of my new privates shouting at his wife on the phone on a random afternoon in Afghanistan. Apparently she had gotten knocked up by some other guy. For the second time. Also, it was his brother. For the second time. But he was determined to make it work and didn't divorce her, even after she tried to leave him for another woman. When he got back home she had spent all his money though, and I almost fell out of my chair when he came in the office one morning and blurted out, “Hey sir, it burns when I pee!” —Kevin Bell

War brings out the best and worst in people, as many can attest. Surprisingly, there is tremendous love at the same time with the pain and loss of war. I sadly saw many soldiers have their heart broken as their “loved ones” at home robbed them blind and ran off with another man or woman. One of my sergeant’s wife became pregnant with another man’s baby directly before my first deployment (he had a vasectomy a year prior). I saw a soldier go home on leave only to find his house empty and wife, dogs, and stuff gone. Don’t get me wrong, I also heard the stories of deployed soldiers who had illicit affairs up and down the ranks overseas and sometime took them home. In all of the loss, I saw a story of remarkable love. A fellow officer who I previously worked with was deployed in a separate area and suffered horrific wounds in an IED blast leaving him disfigured. Out of that incident, he met his future wife during rehabilitation and they have several beautiful children. Every time, I see a soldier relationship disaster, I’m reminded of the burned man who found love that healed his war wounds. —Mike Denny