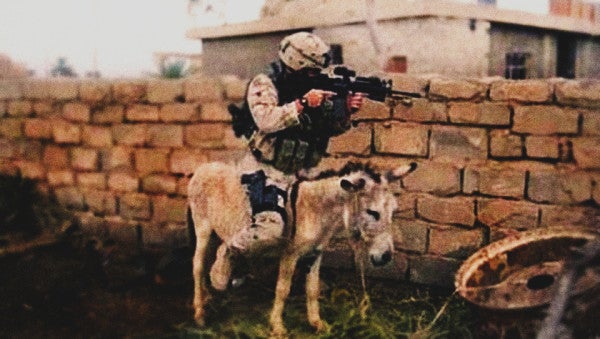 Editor's Note: This article was originally published on June 14, 2016.

I know. It’s weird that I’m reaching out, right? Just figured that since it’s your birthday, I might as well write you this letter to let you know that I’m in California dreaming about who we used to be — like that Adele song, get it? LOL! Just kidding. I’m in New York, but, really, it’s a great song. Check it out if you haven’t already.

Anyways, 242 years old! Wow. You don’t look a day over 30. (Sorry, I’ve totally been stalking you on Facebook.) Love the multi-cam. I wasn’t too crazy about that whole ACU-black beret look you were rocking there for a while. Glad you finally came to your senses. But, look, I’m not writing to talk about fashion or pop music. I just wanted to say hello. From the outside.

The Army celebrates its 241st birthday with the traditional cake cutting at Schofield Barracks in Hawaii.Army photo by Staff Sgt. Chris McCullough

It seems like just yesterday I was driving through the front gates of Fort Campbell for the last time, watching you recede in my rearview mirror. After six years, this little screaming eagle was eager to spread his wings. In my heart of hearts, I knew it was the right decision, but I’d be lying if I told you it didn’t hurt like hell to leave. Listen, I’m definitely not suggesting we get back together (I’m with a civilian job now), but every once in a while I catch myself wishing we could. But who am I kidding? You probably wouldn’t want me back anyways. I’ve put on a few extra pounds. (Okay, since we’re being honest here, I’ve put on about 40.) And I know this is going to make you cringe, but I did it: I grew out my facial hair — and I’ve also tried marijuana. So, yeah, I’m damaged goods.

I remember when we first met. I was young, but old enough to know that life with you wasn’t going to be a walk in the park. Still, I don’t think anything could’ve fully prepared me for what you had in store. To be completely honest, you were kind of a dick back then. I know you had a lot going on, what with fighting two wars and all that, but did you really have to keep me waiting in 30th AG for two fucking weeks?? And what was up with all those mountain climbers? I didn’t climb a single mountain the whole time we were together. And don’t get me started on your cooking. Awful doesn’t even begin to describe it. Okay, okay, that’s not totally true. I wouldn’t mind a bowl of Chili with Beans No.1 right about now. Some jalapeño cheese wouldn’t be so bad, either.

The author poses with a flock of sheep in Kandahar, Afghanistan 2010.

We did have some good times, though. Remember Iraq? Afghanistan? Springtime in Kandahar was truly a sight to behold. “Fighting season,” we called it. I still get goosebumps thinking of all those poppy fields in bloom (and not just because that’s where the insurgents hid!) But even when times got tough, I knew I could always count on you to be there for me. You really did save my ass on a few occasions, and I’m forever grateful to you for that. I can’t thank you enough for the close air support. The artillery, too. Nobody can eliminate an enemy fighting position quite like you. Oh, and thanks for the malaria pills that made me dream in colors that I’m pretty sure don’t actually exist. Speaking of those pills, any chance you can send me a few more bottles? Asking for a friend.

Like I said when I decided to hang up my uniform for good: It’s not you; it’s me. I’m a sucker for beds and not getting shot at. I’m also a pretty terrible marksman, but you know that (and so does the Taliban). And I know that I could be a real pain in the ass sometimes. Look, I’m sorry for constantly complaining about what we had together. The grass is always greener, you know? But enough about me. It’s your birthday! I know you’ve never been one to indulge, but, come on, Army, have a slice of cake. Have two. Enjoy it. After all, it was you who taught me that life is short — that it can just be snatched from you in the blink of an eye. That’s why, now that we’re no longer together, I eat cake all of the time.