We Asked An Expert Why Privates Are So Dumb

In the military, one maxim rings true across generations — privates are stupid. They make dumb decisions, with hilarious consequences. … Continued 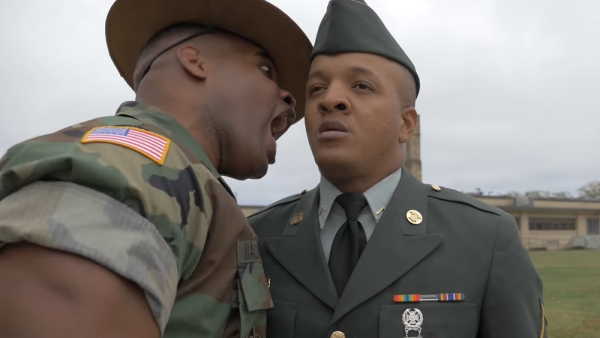 In the military, one maxim rings true across generations — privates are stupid. They make dumb decisions, with hilarious consequences. I know it’s hard to admit, look, I’ll go first. At MOS school as a young Marine, I called an Army command sergeant major, “sergeant,” because I was a dumb boot and thought that’s what you called everyone in the Army E-5 and above.

We’ve all got stories like this. Yusha Thomas, an Army staff sergeant has made a name for himself telling his stories through short videos portraying the lighter (and at times) embarrassing aspects of Army life, like how waking up for PT changes as you get older in the military.

Thomas is best known for his YouTube personas, an old-school, tough-as-nails Army drill sergeant called Backbone, and an unnamed private that’s perpetually down on his luck. In real life, the Iraq War veteran has a warm personality that falls somewhere between the two. Gregarious and playfully sarcastic one moment, and humble the next, Thomas speaks with the genuine confidence of someone who never takes himself too seriously and that disposition has endured during his 13 years in the Army, in which he currently serves as a recruiter in Heidelberg, Mississippi.

The 31-year-old father of four began his self-titled YouTube channel and apparel company in September 2015 after toying with the idea for years.

“As a military community we needed something like this,” says Thomas of why he decided to start making the videos while on active-duty. “I just went in. A lot of it was raunchy and pushing the envelope, but at the end of the day that’s what people wanted to see and that’s what was real. That’s what keeps people interested. … Don’t cut any corners, be completely honest, but be sarcastic and funny simultaneously.”

Though Thomas never served as a drill sergeant himself, he based the character of Backbone off of the drill sergeants and instructors he had in basic and AIT, he says.

Since his first video aired, Thomas has become a rising star in the burgeoning scene of military-oriented humor sites and YouTube channels.

Task & Purpose spoke with Thomas about his inspiration for his principal characters: “Drill Sergeant Backbone” and the poor “Pri” and asked the hard-hitting questions, like: What’s the dumbest thing you did as a private?

Well, for starters Thomas says he went AWOL, absent without leave, and didn’t realize it.

When he was a private first class at his first unit at Fort Campbell, Kentucky, Thomas decided to head home to Philadelphia for quick weekend trip. But there was a problem: He never put in a pass, and then his flight home was was delayed, and eventually cancelled.

Thomas called his squad leader and here’s how he says that conversation played out:

Team leader: “Okay, who did you sign out with at the battalion?”

Thomas: “Uh, sar’nt, I didn’t sign out with anybody”

Team Leader: ‘Okay, when is your leave over?’

Thomas: “Umm, I didn’t sign out with anybody. I forgot to put in a pass.”

Team leader: “So you’re in fucking Philadelphia, and you didn’t put in a fucking pass?”

Then it went from bad to worse says Thomas.

“I’m just quiet and he’s reaming my ass, and I’m like ‘I know I’m getting kicked out of the Army now,’” says Thomas, adding that it just kept going. “He was like, ‘You know what? Get your fucking ass on the next flight out here.’ … I was so scared man, I got on the next plane and got there the next morning and him and my team leader, the platoon sergeant, they smoked the fuck out of me for at least an hour-and-a-half.”

Thomas laughs about it now, but chances were he wasn’t while he was doing push-ups in the dirt as his platoon’s leadership watched with impassive faces. But, at least it never went on paper, not a heavy price to pay for a stupid mistake.

In fact, it’s personal anecdotes like this that Thomas uses for inspiration in his videos.

Like how he got the idea for this one:

When Thomas was at advanced individual training, or AIT, at Fort Huachuca, Arizona, to become a Morse Code operator, an MOS that’s no longer in use, the Army still had drill sergeants at AIT, and in Thomas’ words, one in particular, named Smith, was “a fucking dick.”

“He did not like me whatsoever,” says Thomas. “This dude hated my fucking guts … We’d get smoked every day for anything, and that’s where I got that idea 'getting smoked for anything' from, because my drill sergeant was that fucking petty.”

Speaking of petty, there was that time Thomas called an Air Force technical sergeant a sergeant, and Smith found out.

“I come out to formation and I’m just standing there, all happy, talking to my friends before formation, and we hear: ‘Platoon, ‘ten-huh, parade-unnh,’” says Thomas. “And he just starts going off. ‘So, private Thomas, you think you’re a fucking stud, huh? You think you can come out here and call a fucking tech sergeant a sergeant, huh?’”

“‘Oh, I’m a fucking ‘sorry drill sergeant? Too easy!’” Thomas recalls Smith saying, adding “That’s where I got the shit from. He smoked me for about 20 minutes, and it was so embarrassing because I was a bit chubby back then, and you get to the point where you can’t do any more push-ups, so you’re just sitting in the front-leaning rest and my back was bowed, I was sagging in the middle and he was like: ‘Get your fat ass up, because you’re sitting there looking like a fat fucking seal.’”

These anecdotes have since become a source of amusement for Thomas, and his avid following. After all, who hasn’t done some dumb shit as a private, or a boot lieutenant?

On that note, we’ve all thought about cutting corners on a ruck-march at least once. Don’t do it, it’s a terrible idea.

“I did something stupid at my first unit at Fort Campbell,” says Thomas. “We had 12-mile ruck marches every two weeks, so instead of following the packing lists, I didn’t know they were going to check, it was my first 12 mile, so I tried to cut some corners and instead of putting boots and socks in, I put a bunch of ramen noodles in my bag, and at the end of the ruck march everyone was told to dump their shit and I was so fucking nervous man, I was like ‘holy shit.’ Everyone’s laying their shit out, and I was standing looking like I was stuck on stupid.”

Told to dump out his pack, all he could think was: “Oh fuck, ‘I don’t think you want to see what’s in my bag.’”

“All the things start tumbling out, oodles of noodles, twizzlers and jolly ranchers, Kool-Aid and all that bullshit, they smoked my ass so bad man, I couldn't walk straight for a week man, it was right after the 12-mile march,” says Thomas, adding that “they used to call me Pvt. Cut-Corner.”