Finally, The Perfect Tacticool Outfit For The Wall Street Banker In Your Life

Tactical gear — packs and clothes that are 90% pocket, camouflaged, and covered with straps and buckles — are all... 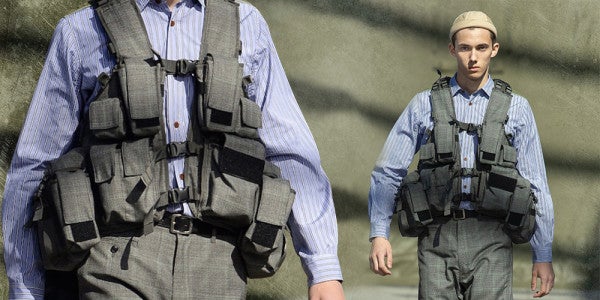 Tactical gear — packs and clothes that are 90% pocket, camouflaged, and covered with straps and buckles — are all the rage among civilians right now. This should surprise no one given American society’s years-long love affair with “military-style” anything, but this trend has become especially egregious in recent years. Just take a look at how prevalent MOLLE has become.

But what should surprise people is this little ensemble from designer Junya Watanabe’s spring and summer men’s collection, which had its spot on the runway as part of this weekend’s Street Style fashion show in Paris:

This is clearly designed for the guy who just started his gig in high finance but wants to impress his colleagues by being a silent, albeit loudly dressed professional. It’s either that or he takes his everyday carry to the extreme and needs the extra pockets for all those other tacticool nicknacks he’ll never use.

Now, I’m not going to dive into some snooty professional vet rant about who should or shouldn’t get in on the fetishization of all things military; that’s not my place, and I don’t really care all that much. Sure, I could pose a theory on what this trend might be in response to — something to do with, say, a critique of militancy as trendy and hip, or the tension created by flooding schools, offices, and streets with equipment originally designed for war and violence.

But I won’t, because that’s stupid — almost as stupid as a pinstripe tactical vest with a dozen or so magazine and grenade pouches (or in this case, business card and smart device holders), but not nearly as stupid as seeing it paired with pinstripe shorts and a coyote brown cap that was probably pilfered from Jacques Cousteau’s closet.

That said, if you took one look at that photo and thought “Oh man, the fellas at work will totally stop ragging on me if I show up wearing that,” or “you know what, I always wanted to dress like a fashion-forward mall cop,” or even “man, I wish there were more options for my entourage,” then you’re in luck: