Recently, Recoil Magazine got an exclusive interview with former presidential advisor and bad-parking aficionado Sebastian Gorka. If you need a... 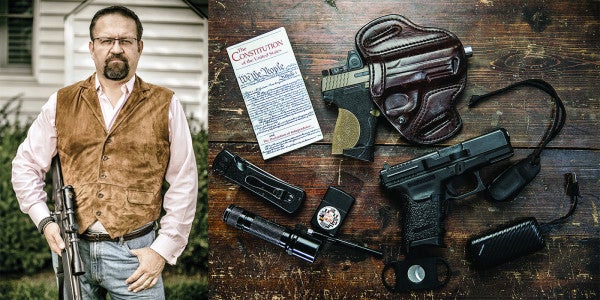 Recently, Recoil Magazine got an exclusive interview with former presidential advisor and bad-parking aficionado Sebastian Gorka. If you need a refresher, Gorka was the White House official surrounded by controversy because of his Islamophobia, exaggerated credentials, links to Nazis, and general disregard for gun safety.

No, the other one.

Anyway, buried in this fluff piece was a picture and a description of Gorka’s EDC, or “everyday carry” items. There are myriad places on the internet, including an r/EDC subreddit, dedicated to showing off and parsing people’s EDCs. Some can be pretty interesting. What does a medical student carry every day? How about a city firefighter? How does that compare to a volunteer firefighter in the country?

Then you have groupies like Gorka, a man whose entire self-image is cobbled out of pieces of man-flair. He’s a guy who drives a Ford Mustang — but the downscale 4-cylinder. He buys a vanity plate extolling the virtues of The Art of War, the ancient Sun Tzu text that keeps getting reprinted because it helps keep second lieutenants occupied while their soldiers put together a battle plan.

Honestly, I'd be upset if Seb Gorka DIDN'T have a Ford Mustang with an ART WAR personalized plate pic.twitter.com/mF0taiZNI3

And, of course, he parks his bumper-stickered ’Stang badly and conspicuously — like, on the sidewalk — the sort of performance that sad clowns mistake for an alpha male move.

Despite @ArlingtonVA laws prohibiting this behavior, I came across this car that had just been parked on the sidewalk at Gateway Park pic.twitter.com/UYrDwnxWos

Gorka is the alpha-est sad clown. From his McLovin’-inspired vest to his store-bought paracord bracelet.

So let’s take a look at what’s in the pockets of a man whose last job was in the most heavily fortified house in the country, who now spends his days on Fox News TV studio panels as a national security advisor:

Two guns. Not even two guns of the same brand. NOT EVEN TWO GUNS THAT SHOOT THE SAME ROUND. The Glock 29 is a 10mm pistol and the Smith is a 9mm. I suppose I can get behind carrying two guns if you anticipate a lot of shootouts, somewhat raising your odds of one gun spontaneously breaking mid-shootout. I mean, I guess you can’t trust only the gun taped to your back in the event that Hans Gruber has you cornered in Nakatomi Plaza and took your machine gun. Or just the gun stuffed in the ankle holster for you to pull out on your captor while you surreptitiously tie your shoe. I don’t really know. I don’t have hero fantasies.

Alright, now that I think about it, it could make sense to have two different sizes of rounds. In Call of Duty, you don’t want to carry two guns chambered in the same round. That’s just wasting all the dropped ammo you’ll find on the battlefield. Of course, it could also be for when Gorka challenges another journalist in a duel and actually goes through with it. Nobody can ever weasel out of a duel with you if you can provide their gun!

First off, don’t carry two guns. Or one gun, really. Especially when you’re a dude who works in Washington, where concealed carry is currently not legal.

If you insist on carrying a gun, might I suggest the Henry AR-7, pictured above?Based on the survival rifles carried by pilots during the Second World War, it’s a compact, easily broken-down .22 that might actually be useful in a survival situation. More than whatever dual-wield akimbo nonsense Gorka has in mind.

I can get behind this one. I use my phone as a flashlight, personally, and I used to have one of those little LED lights you could squeeze on my keychain. Mostly, I just have flashlights in strategic locations in my house, where I can always get a hold of one in the event of power loss.

The dork alarms start to really go off, however, when someone knows the specific brand of flashlight they’re carrying. This man did some research into what small device that makes light would be best to carry every day. But not for “fine work,” obviously; you’ll still need a penlight for that.

So what distinguishes Gorka’s preferred model 6P flashlight? Amazon has some fancy descriptions of it, like High Strength aerospace aluminum body, anodized for durability and Tactical tail cap switch – press for momentary on, twist for constant on. Tactical! You can earn the yearly GDP of Latvia just by calling random things tactical. It’s a frigging flashlight. You aren’t taking it into space, you’re going to the Sean Hannity show to yell at civil rights attorneys.

You can get those rectangle keychain flashlights personalized. I would suggest getting a gross of those with your Twitter handle or something on it, cramming a dozen in your pocket, and giving the rest away.

Considering the 6P costs $79.20 on Amazon and you can get 50 personalized key chain flashlights for $80.50, I think I’d rather have the boxload of lights I can put pictures of tanks or clowns or whatever on.

That jet flame thing he talks about is a good retrofit for lighting bongs. Or at least so I've heard.

There is a short list of things that have never let me down in this world. On that list is a Bic lighter. No reason for any other kind of lighter.

So he likes CAT tourniquets (“I can deploy it with one hand,” Gorka says, which… ugh).

Okay, pump the brakes on this one. Sure, the CAT is great for applying one-handed, as advertised. There’s lots of videos online on how to apply it. Gorka, of course, needs to let you know he’s ready for any situation, in this case confirming that he has indeed watched a Youtube tutorial. I’m sure that if pressed, he would tell you he can do it with either hand.

For most middle-aged men who think emergency prep is browsing Amazon instead of doing PT, it’s going to take longer to watch a tutorial than you’ve got to wrap a CAT-T around a thigh one-handed before a gushing femoral artery bleeds out. Anything else is going to take more than a cursory knowledge of emergency medicine and a John Wayne complex.

Also, by stating he can deploy it one-handed, Gorka absolutely means on himself. Most people who are serious about emergency medical training are thinking about how to help others. He’s the kind of guy who touches the tourniquet imagining himself bravely torquing down his left bicep while the left hand bravely keeps killing the terrorist threatening western civilization or whatever.

A first-aid kit is always a good idea. If you are serious about being prepared for an emergency, such as a mass shooting, the best thing you can arm yourself with is knowledge. Can you tell the difference between an arterial bleed or a vein? How do you make a pressure dressing? These are very basic proficiencies hat drastically increase your chances of saving a life in an unlikely but very dicey scenario. The Army has the Combat Lifesaver course, and you can get the study book for free. Just 30 minutes of reading through traumatic wounds or opening airways goes a long way, as Gorka can hopefully tell you.

If you want to pick up actual medical supplies to build an emergency first-aid kit, there’s lots of places online, but I would suggest checking out Chinook Medical, which has been suggested to me by medics. Seems they have the real deal, and you can either buy a kit, or piece one together yourself.

There's only a few people in this world who need to carry knives with any regularity. Most of the time I've needed a knife, my keys have done the job perfectly. How sharp of an edge do I really need to cut through cellophane tape on my order of Task and Purpose branded rectangular flashlights?

One of the best things the Army ever gave me was a Gerber multitool. It’s lasted me years and been used in more situations than I can remember. If you insist on carrying a knife, save a bit of money. Ditch the Hissatsu (made for close quarters battle environs) and get a Gerber for 30 bucks. You know if you asked to borrow Gorka’s knife to cut some 100 mile-an-hour tape, he’d give you a horrified look and a spiel about how it’s made for Special Forces, until you just tear the tape with your teeth and spit the stringy bits at him.

All politicians have to wear a flag pin on their lapels, but the real dorks carry a pocket Constitution. Bonus points if they tell you they carry it next to their heart.

If you, for some reason, need to access the Constitution in an emergency situation, look it up on your phone like a normal human being.

All in all, this EDC costs about two months of my mortgage. Gorka has spent entirely too much money on things that will rarely be used outside of methodically placing them all on the night stand at right angles every day.

On a personal note, here’s a rundown of my EDC:

1. My keys with a lanyard my recruiter gave me 18 years ago.

He gave me a couple and my last one was disgusting, so I recently swapped it with this backup. Cost: Two years at war and lots of missed birthdays, but some good times and good benefits, too, so it’s a wash.

I want to say I paid $25 for this wallet at Kohl’s. There is no money inside.

Got this for $30 in Orlando. They can customize them from a bunch of different designs. The phone that fits in it is a Galaxy S7 that is nearly paid off. It holds my flashlight and my pocket Constitution, as well as an app that makes gunfire noises.