Here’s What Happens When You Let Veterans Babysit 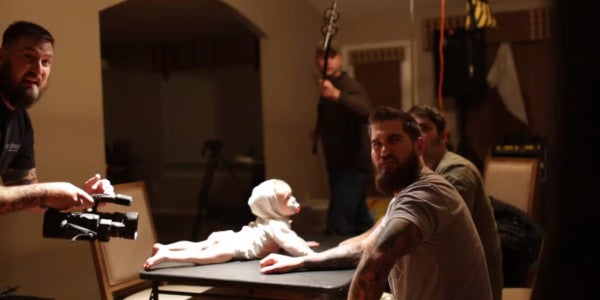 Ask anyone who has ever served as a noncommissioned officer or higher — military leadership can occasionally feel a bit like babysitting. Young service members occasionally struggle to live up to the standards the military set, and it’s the responsibility of military leaders to set them straight.

This can mean inspecting rooms, uniforms, and clean shaves. It can mean micromanaging those troops who are struggling with handling their jobs. And it can sometimes feel a lot like babysitting.

I remember on one instance dealing with a new Marine in my unit who took a little longer to learn the military standard. Dude didn’t have any sheets on his bed, and on those government mattresses, that’s not a good idea. To make matters worse, when I told him he had to get some, he threw me a little shade.

“Do you think this is why I joined the Marine Corps,” I shot back, “because I wanted to tell a 19-year-old man he has to put sheets on his bed?”

But now, the always hilarious Mat Best has taken it to another level. Best runs Article 15 Clothing, which makes clothing and gear for the military community. He also makes hilarious videos.

We’ve previously offered our readers some of Best’s bests. The fake rap battles between the Navy SEAL and the Army Ranger, and between the Green Beret and the MARSOC Marine, come to mind.

Now, he shows us how veterans babysit, especially when they suspect that baby has information on who executed the email hack on Sony Pictures, or has ties to the North Korean regime.

Watch the hilarious video below and let us know what you think about the important question, where’d they get the baby?