The Infamous ‘Nacho Chip Bro’ Revealed To Be A Marine Vet

When Marine veteran Marius Loots and his friends decided to attend a March 5 rally for Donald Trump at the... 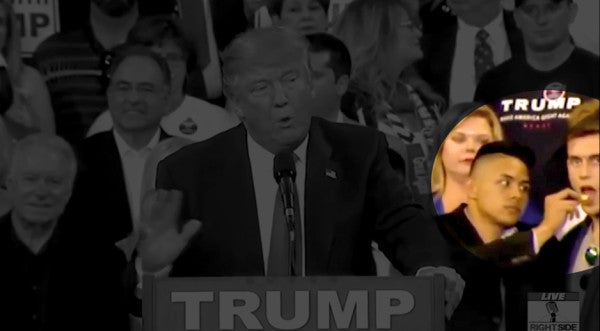 When Marine veteran Marius Loots and his friends decided to attend a March 5 rally for Donald Trump at the University of Central Florida, he was still on the fence about the Republican presidential candidate.

But when Trump asked the audience to raise their right hands and swear an oath, Loots, a freshman at the college, realized he was out of his element.

“The turning point for us was when Trump asked us to hold our hands up to make a pledge,” Loots explained in a March 9 video interview with INSIDER. “I personally am never going to pledge to anything other than the Pledge of Allegiance or Oath of Enlistment. That’s something that alarms me a lot. It kind of makes us feel uncomfortable.”

But he was standing in the VIP section of a 2 hour long rally, so what’s a guy to do?

Naturally, Loots did what most of us might do in that situation, he gave zero fucks and had his bro hand-feed him a nacho chip while maintaining perfect eye contact with the camera.

After the moment made it online and became immortalized in GIF form, everybody seemed to have an opinion on it. They were either aghast, elated, or just really wanted to know how good those nachos were.

The real reason was actually quite simple.

“So we just started having a good time with it and we just wanted to do something funny for our friends and family,” explained Loots.

As for what he whispered to the friend that fed him chips airplane style?

This veteran went to a Donald J. Trump rally with an open mind. Then Trump asked everyone to pledge allegiance to him.The veteran refused to do that.So he did something ridiculous instead…