This ISIS fighter made a technical out of a shopping cart

That's certainly a step up from the spray and pray over walls tactic that is often employed by jihadists. 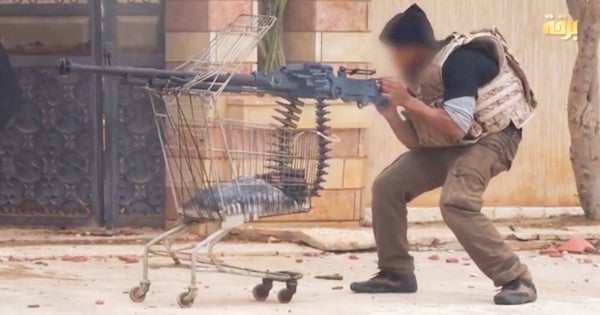 We now know that you can set up a belt-fed machine gun on top of a shopping cart to make a mobile firing platform, but you probably won't be allowed to return the rig back to Target.

That knowledge comes courtesy of an ISIS fighter in Libya, who was spotted in one of the group's propaganda videos free-gunning as any smart shopper would.

Hugo Kaaman, a contributor to Jane's Terrorism & Insurgency Centre, recently tweeted a clip of the amazing find, which he told Task & Purpose came from ISIS video footage taken in Libya and released in May 2015.

That's certainly a step up from the spray and pray over walls tactic that is often employed by jihadists. Not only does this combat cart provide some stability for the gun — which seems to be a Soviet DShK heavy machine gun — it even holds a box of ammo. Innovation!

Still, this video may not be the most creative thing to come out of the Libyan battlefield. As Kaaman also tweeted, they also did some testing of combat roller blades.

Is your combat gear slowing you down? Improve your mobility like this Libyan rebel and strap on a pair of roller blades. pic.twitter.com/FOrZKR6TCW