A lot has been made of how some NATO allies aren't paying 2% of GDP towards defense that could help... 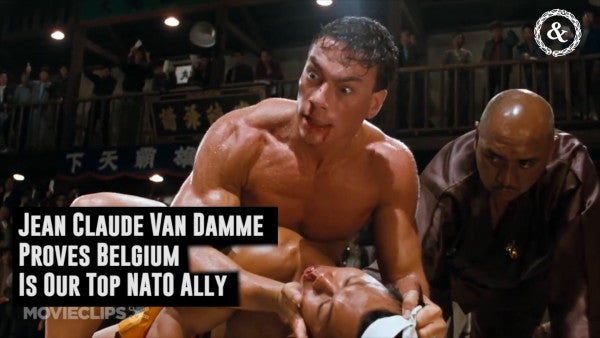 A lot has been made of how some NATO allies aren't paying 2% of GDP towards defense that could help keep the the world a safer place. In fact, Belgium spends only .9 percent of it's gross domestic product towards it's military.

But they have one weapon that counts for the other 1.1 percent: That weapon is Jean Claude Van Damme.

The muscles from Brussels, also known as JCVD, has appeared in over 70 slices of cinema. Belgium's Weapon X was shipped covertly to Hollywood as a gift to Ronald Reagan. During his time deployed to Los Angeles, Van Damme managed to star in at least a dozen films where he portrayed a NATO commando willing to go AWOL to kick someone in the face.

In
Bloodsport, JCVD plays a young U.S. Army captain who goes AWOL to beat up a 43 year-old man in an underground fighting tournament in Hong Kong.

The CIA involvement show in the film may have revealed that he was actually on a black side SOF assignment. His trip into the Hong Kong underworld coincides with the Chinese launch of the
DFH-2A communications satellite. It's possible his real target was a information dead drop at the venue, but the FOIA request submitted to the DoD regarding the Kumite won't be fulfilled until 2083 at the earliest.

Sometime after Desert Storm, JCVD was upgraded to a
Universal Soldierconfiguration thanks to DARPA, but contractor fraud, waste, and abuse led to the untimely end of the project. Then JCVD went down a dark path that eventually led to his stewardship of a mercenary group in The Expendables 2. America was forced to dispatch Sylvester Stallone to reign in the rogue NATO weapon and retire it from the arsenal of the free world.

Yes, Belgium has stayed the course by purchasing a fleet of
F-35 Joint Strike Fighters, but a retired Jean Claude Van Damme is not quite the deterrent he once was to foes such as Russia or Luxembourg. Luckily, much like Reagan, President Trump comes from a Hollywood background.

Procuring another Jean Claude Van Damme should be a top priority of this administration during a renewed period of great power competition.