Mat Best, president of Article 15 Clothing and star of the upcoming “for veterans, by veterans” zombie apocalypse spoof Range … Continued 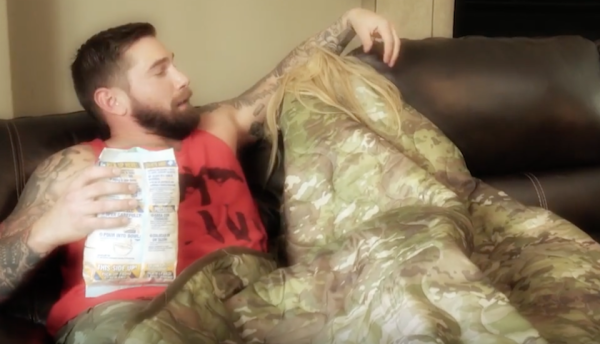 Mat Best, president of Article 15 Clothing and star of the upcoming “for veterans, by veterans” zombie apocalypse spoof Range 15, has written a smooth R&B love song about a piece of standard-issue field gear. What camouflaged, inanimate object could be worthy of such a heartfelt ode? Only the silkiest, smoothest, most lovable piece of material to ever grace the battlefield.

Related: Why the woobie is the greatest military invention ever fielded »

Technically, it’s just a poncho liner. But among those who’ve experienced its motherly embrace on a chilly winter night, this 82 x 62-inch section of double-layered quilted nylon is affectionately referred to as the “woobie” — as in, “Hey, Spc. Jones, if you need me, I’ll be over here in this foxhole, whispering sweet nothings into my woobie’s ear.” Roger that, first sergeant!

Considering the immense love for the woobie that many veterans hold in their hearts, it was only a matter of time before somebody put pen to paper to express that love in lyrical form. And given Best’s musical talents, as well as his background as a five-times deployed Army Ranger, it makes sense that he’d be the one. The song is called, simply and beautifully, “Be My Woobie.” Take a look.