Don't look now but one of the world's most insane (former) leaders is now quoting Tupac Shakur to criticize the... 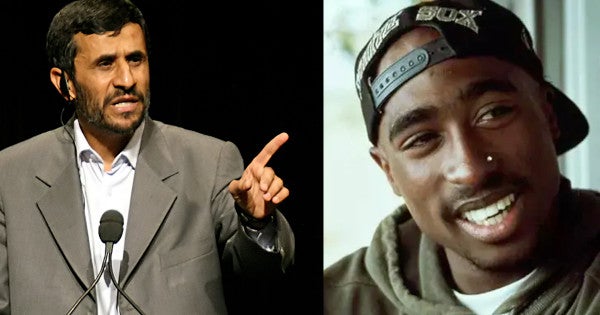 Don't look now but one of the world's most insane (former) leaders is now quoting Tupac Shakur to criticize the U.S. government.

Mahmoud Ahmadinejad, the former president of Iran, tweeted this on Monday:

One of the main objectives of the #BlackPantherParty was feeding the hungry; which did not sit well with the #UnitedStatesGovernment . #BrotherHuey #October15

" It's time to fight back that's what Huey said. Two shots in the dark, now Huey's dead"

If you read that and said to yourself, hmm, I've heard that last quote before. Where have I…?

It's from the late, great, rapper Tupac Shakur, who sang of racism, the war on drugs, police treatment, and the struggles of the black community, in his posthumous 1998 hit song “Changes.”

Here's a larger portion of the lyric:

Give 'em guns step back watch 'em kill each other

It's time to fight back that's what Huey said

And that's how it's supposed to be

How can the Devil take a brother if he's close to me?

I'd love to go back to when we played as kids

But things changed, and that's the way it is

And yet in this day and age, this is probably the 43rd craziest story we'll hear about today.