In the U.S. military, push-ups are used to measure a service member’s upper-body strength. And because the physical fitness test … Continued 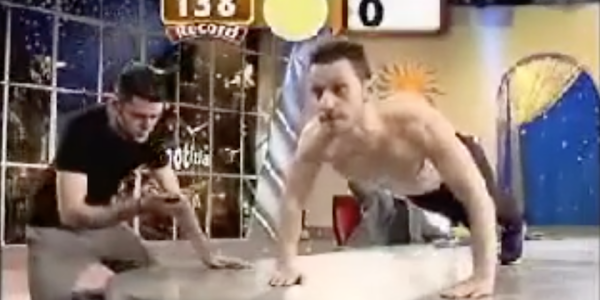 In the U.S. military, push-ups are used to measure a service member’s upper-body strength. And because the physical fitness test directly impacts a service member’s eligibility for promotion, what qualifies as a push-up isn’t open for interpretation. There are rules, dammit.

According to Army regulation, to complete an actual push-up, a soldier must keep his body straight, lower it until the arms are, at least, parallel to the ground, and then push back up until those very same arms are completely extended. That’s one. Do it again, that’s two — and so on. Judging by that standard, the man in the below video, appearing onStriscia la notizia, an Italian satirical television program, in 2014, manages to set the “world record” for push-ups by performing a total of zero actual push-ups in 60 seconds.